DeVos Protesters Vow To Press On After Confirmation Vote 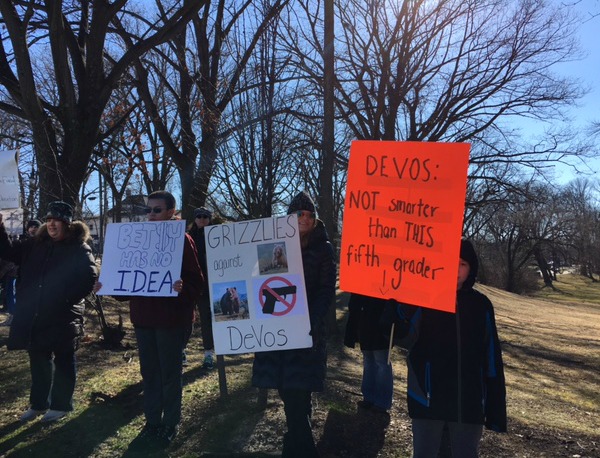 The Verona residents who participated in a protest rally against Betsy DeVos on Saturday vowed to continue their opposition to her after the United States Senate confirmed DeVos as the Trump administration’s secretary of education. New Jersey Senators Cory Booker and Robert Menendez voted against confirmation. The vote was a 50-50 tie, which was broken by Vice President Mike Pence.

“The result was not entirely unexpected,” said Isabella Williams, the Verona High School junior who organized the rally, which drew students from Verona elementary schools, H.B. Whitehorne and VHS, as well as parents and Veronans who are educators outside of town. “However, with the large amount of protests that have occurred all over the country, including Verona, I believe that her power and policies have been weakened. Everyone that attended these protests–and more–will fight any policy that aligns with her pre-confirmation promises. I intend on reaching out to the BOE to ask how they intend on ensuring that her policies are not implemented in Verona schools and how they will address potential funding cuts due to vouchers.”

DeVos, who grew up in a wealthy Michigan family and is the daughter-in-law of billionaire Amway co-founder Richard DeVos, has been a proponent of school choice and voucher programs which, if implemented on the federal level, could drain funding from public education. At her confirmation hearing, DeVos also seemed to not know that the Individuals With Disabilities Education Act (IDEA), which governs how public schools educate children with disabilities, is a federal mandate and not a state responsibility.

“Parents and teachers must not feel defeated or disheartened,” said Monica Taylor, a Verona resident who is an associate professor of teacher education at Montclair State University. “They must use their disgust for DeVos to fuel them as activists. They must speak out locally at school board meetings and at the state board. They can join activist groups like Save Our Schools NJ. They need to become informed about issues through organizations like Network for Public Education and they need to volunteer in their schools, ask questions, and advocate for their children. They need to join or form advocacy groups and pay attention to politicians’ narratives and allies. Parents, teachers, union leaders, teacher educators and politicians need to work together to keep the pressure on and fight back.”

Those thoughts were seconded by Charity Dacey, a Verona resident who is the director of Teacher Education Admissions and Retention at Montclair State University, and who was also at the Saturday rally. “DeVos’ appointment is just the first in a series of events to come, all to be opposed in an organized and consistent way in my opinion,” she said. “There are already signs that the next step is a bill will likely come forward to abolish the department of education. Without oversight by a group of people to protect and govern the students who are most vulnerable the effects of releasing power to each state to decide on major issues for themselves children will need real advocates. Setting standards and holding the states accountable for IDEA and NCLB [No Child Left Behind] has been the federal governments role in the past but who knows in the future? Teachers parents and school leaders will be more on their own and it will be incumbent upon us all to ethically ensure students are protected and provided with what they need to be successful learners–regardless of race, class, gender, sexual orientation, ethnicity or linguistic background or atypical development/learning needs.”

The Friends of the Verona Public Library are seeking donations of gently used children’s and adult fiction books...
Schools