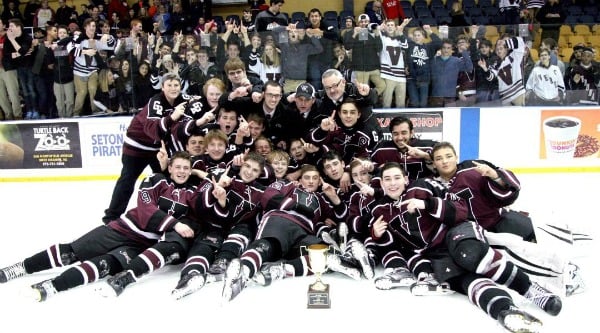 They did it. The Verona-Glen Ridge hockey team out-skated, out-defended and out-shot Montclair Kimberley Academy to knock off the reigning champ and take home the McInnis Cup with a 4-2 win last night at South Mountain Arena.

“Those boys are something else,” VGR Coach Ken Lilien said after the victory. “We wanted to put VGR back on the state hockey map and they did it.”

MKA came into the game with back-to-back McInnis championships to its credit; in fact MKA has captured the cup four times in less than a decade. It didn’t help that VGR had lost twice to MKA this season. MKA fans were so confident that this would be another one of those championship nights that they opened the game by chanting “three-peat, three-peat, three-peat” from their stands. Yes, VGR had made it to the finals–for the first time in the 23-year existence of the McInnis–and had done so with an overtime win over top-seeded Montclair High School. But there were some looks on the VGR side of the arena that just had “brave face” written all over them.

The first sign that it might be a different kind of outing against MKA came at 3:39 in the first period when Kevin White, a senior from the Verona side of the team, sailed one into the net. Barely a minute into second period, Glen Ridge senior Owen Gleeson did what he has done so brilliantly all season and boosted VGR’s lead to 2-0. MKA’s Devin Pepe got the Cougar’s first goal of the night mid-way through the period, but before the second ended, VGR’s Sean DeCandia pushed its lead to 3-1.

It was Gleeson again at the start of the third and, with VGR’s student fans growing louder by the second, an undeniable feeling gripped the crowd that this was going to be VGR’s night. Their faith in their team wasn’t shaken by an MKA goal (that was disallowed) because they seemed to know that VGR was going to pull this one out, and their faith was rewarded when Gleeson pushed the score to 4-1 VGR and VGR goalie Liam Blaney kept racking up the saves (28 on the night). Pepe scored again for MKA, but by then the ending was written.

“We controlled the whole game, but I can’t say I expected it,” said Lilien. He acknowledged that, coming off the big win over Montclair on Thursday, the team could have lost focus. “We talked about it at our dinner to raise awareness,” he added. “We said it wouldn’t be history without finishing it.”

And even with the win, there is more to finish. The state playoffs start on Monday, and VGR, seeded 13th in the Public B group, takes on #20 Woodbridge. The game is at South Mountain Arena at 6 p.m.

MKA’s broadcast journalism students filmed the entire game and posted it to YouTube, and you can watch it here.