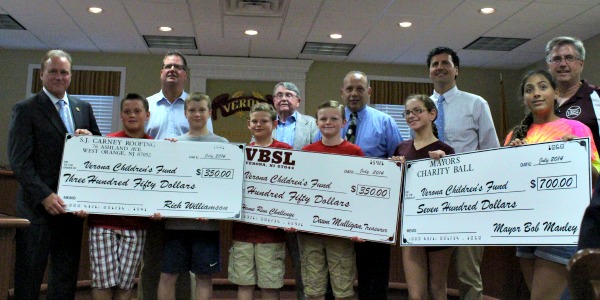 Rich Williamson, president of the Verona Baseball & Softball League, had some help presenting some big checks to the Verona Children’s Fund at the last Town Council meeting.
Three years ago, VBSL started a home run derby challenge in which S.J. Carney Roofing, a company that Williamson is affiliated with, would donate $10 for each home run hit during the spring/summer season. This year, the VBSL matched the amount, and the Verona Mayor’s Charity matched that match. In the end, $1,400 was donated to the Verona Children’s Fund this year, more than both of the previous years combined.