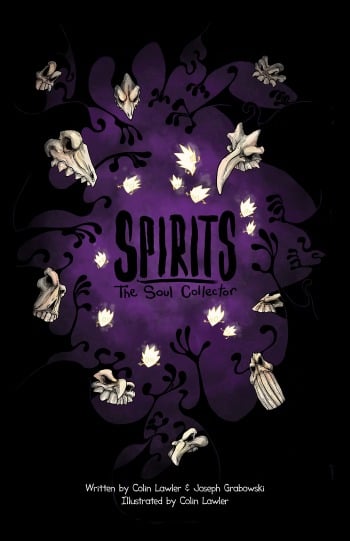 Joseph Grabowski and Colin Lawler are pursuing their dream and they hope you will want to be a part of it.

Their dream is writing and illustrating a 350-page graphic novel, and the 2003 graduates of Verona High School have just launched a Kickstarter fundraising campaign to publish their work.

A graphic novel is a long story told in a comic strip-style format: Imagine the entire story of Spider-Man being told in one volume, instead of weekly or monthly installments. The novel that Grabowski and Lawler have been working on is called Spirits: The Soul Collector, and it involves a 12-year-old boy, an enchanted necklace and a mysterious spirit world. They recently completed its first two chapters, with Lawler doing the illustrations and both contributing to the story line, which is already mapped out for three novels.

“I approached Joe, a longtime friend, a year and a half ago with the idea of collaborating on a story,” Lawler says. “I wanted to create an all-ages story and I knew his knowledge of all-ages literature and having worked with youth would prove to be invaluable. More than anything I trusted his opinion and knew we worked extremely well together.”

The $5,000 Kickstarter campaign will cover printing costs of the first chapters, and help the two young men do a promotional tour of all the comic conventions in the Northeast. The Kickstarter format enables entrepreneurs–often from creative fields–to set a fundraising goal for a project. Supporters pledge different amounts, which range from $5 to $500 for Lawler and Grabowski’s project. If they reach their funding goal within the set time (July 15) donors must make good on their pledges. If they don’t the fundraising is voided.

Lawler and Grabowski have known each other since eighth grade, when Lawler’s family moved to Verona from Hartford and Grabowski’s arrived from Bennington, Vt. Lawler took many art classes at VHS, contributing to two of the murals still up in the school’s halls, while Grabowski focused on writing and became a key contributor to the yearbook. Lawler went on to get a B.F.A. in animation from the Savannah College of Art and Design, while Grabowski studied engineering for a time at the University of Delaware. Both have day jobs now, but the rest of their time is spent working on their novel. “For the past eighteen months Joe and I have put our nose to the grindstone, spending much of our free time writing and illustrating the pages we are offering with our Kickstarter,” says Lawler.

“Comics and graphic novels are more conducive to a small team creating longer stories,” adds Lawler, “unlike animation which can require a larger team, as well as more time and money, to produce a story of similar length. I am currently working as an illustrator on another graphic novel titled The Blood King.”

If you want to support their work on Spirits, you can learn more about the Spirits Kickstarter here. Their main Web site for the novel is here and you can also take a look at Lawler’s portfolio. You can watch a short video on the Kickstarter project below.