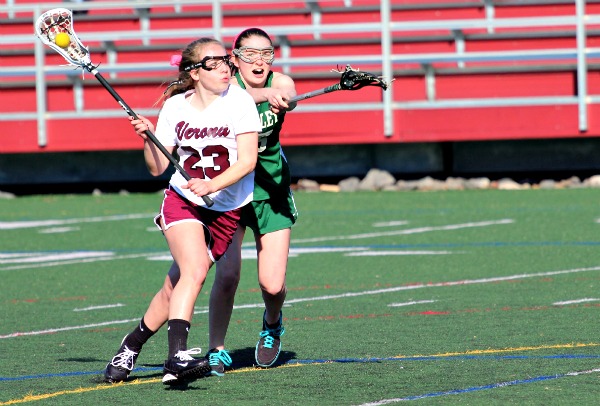 If you want to know how far Verona’s lacrosse program has come, you might need to look no further than Lauren Ednie. She got her start when the program started, in its “mini-lax” group in first grade. She’s now finishing her fourth year as a starter on the Verona High School lacrosse team and preparing to play for NCAA Division I Wagner College this fall. She’s also the high scorer on the VHS team this season, with 29 goals and four assists to her credit so far. For her efforts, Lauren Ednie is the Verona Sports Boosters’ Senior Athlete of the Week.

The defensive midfielder has been on a scoring tear this season. With seven more games to go, she’s already scored almost as many goals as she did in all of the 2013. As of this writing, she has 86 career goals and 21 assists, for 107 total points. When VHS defeated Pascack Valley 13-7 on March 31, Ednie scored five of Verona’s goals. Her fans on Twitter congratulated her something like this:

She seems to have gotten the message. In Verona’s 17-16 defeat of Pequannock this past Wednesday, Ednie scored seven of the goals. Ednie plans on majoring in psychology at Wagner, but she seems to already understand the mental weaknesses of her opponents. Just watch how she cuts through Columbia High School’s defense to score.

Ednie has been amply honored for lacrosse play. She was All League, Honorable Mention in her sophomore year and All League, Second Team as a Junior. She also was named First Team (Liberty Division) in the Super Essex Conference. When not on the field for the Hillbillies, she volunteers with Verona Youth Lacrosse and clinics, and coaches for the TriState Lacrosse club team. And in case you’re not intimidated by her play in that video, you should know that she is also a second-degree black belt in Taekwon-Do.