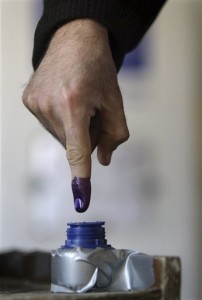 You might remember that, a year ago Elan Kriegel, the son of Congregation Beth Ahm‘s former Rabbi Aaron Kriegel and Sarah Kriegel, was a big factor in President Barack Obama’s second campaign.

Elan Kriegel co-founded a data analytics firm after that win and, on Wednesday, it got a big shout-out in the Washington Post. According to the paper, Kriegel’s company BlueLabs, was a key factor in Terry McAuliffe’s victory in Virginia’s election for governor. McAuliffe outpolled the Republican hopeful, Attorney General Ken Cuccinelli II, by 50,000 votes thanks to BlueLabs data crunching.

Rabbi Kriegel, who called us yesterday to pass on the news, noted that BlueLabs was also involved with Corey Booker’s Senate campaign. Booker defeated Steve Lonegan on October 16.