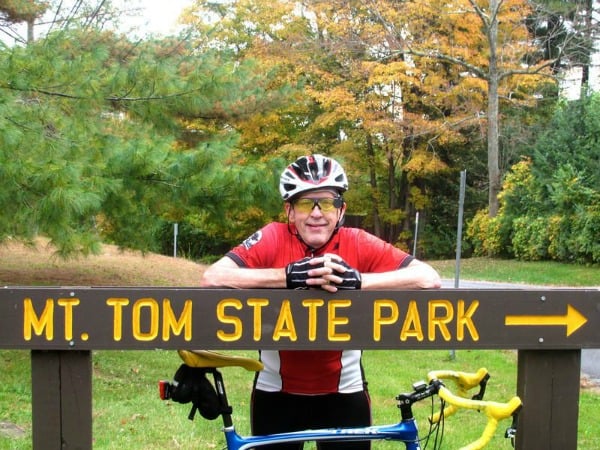 Tom Threlkeld was one of the more memorable characters in the large cast of characters that was the Verona High School class of 1972. He grew up to be well respected business journalist, writing extensively about the strategic use of technology in business. He was also an avid cyclist, known to cover thousands of miles on his bike every year..

On Sunday, October 20, Threlkeld was killed in a hit-and-run accident while biking in Bethel, Conn. He was 59.

Since the weekend, tributes to Threlkeld–who added his wife’s last name to his own–have popped up all over the Internet. Steinert-Threlkeld was the founding editor of Baseline magazine, and made it a finalist for General Excellence in the National Magazine Awards in 2005. Most recently, he was the editorial director at IBT Media and created a cycling blog, Edge of the Road.

In the Weston Forum, the newspaper in the town he now called home, Steinert-Threlkeld was remembered by his neighbors as a “joyful cyclist” who would often take photos of his rides. “…what always stood out to me,” wrote a former college on PCMag.com, “was Tom’s ability to conceive a magazine or website concept, build the right editorial team, and turn the idea into a reality. He did it with a keen insight into his audience, a truly great nose for news, and a fun sense of humor. All who knew him will long remember his laugh.”

““We were so privileged to have had Tom on our staff,” wrote Bob Mong, editor of The Dallas Morning News, a paper that Steinert-Threlkeld worked at early in his career. “Often in at 4:30 a.m. and out whenever his last story was filed. Technology was his life.”

According to his obituary, Steinert-Threlkeld is survived by his wife Kayte and their two children, Zachary, 26, of San Diego, and Shane, 23, of Stanford, Calif. A memorial service will be held for Tom on Saturday, October 26, 11 a.m. at Cobb’s Mill Inn, 12 Old Mill Road, Weston. The obituary asks that, in lieu of flowers, donations in Steinert-Threlkeld’s name can be made to the Weston Warm-Up Fund or the Connecticut Humane Society. You can leave an online condolence through the Magner Funeral Home.

Previous article
Board Of Education Candidate: Judy DiNapoli
Next article
VHS Band Director To Be On Sirius XM