10U Softball Takes Second In Playoffs

The team compiled a 7-1-1 record in the regular season, and won a dramatic come-from-behind 3-2 victory in nine innings over the Cedar Grove Panthers in the semi-final game on June 1. In the bottom of the sixth inning, home team Verona had speedy star Jessie Loudon and Jordan Stafford on base, when Annie Johnson crushed a two-run, game tying double to left field to tie the game in regulation.

The international tie breaker rule came into effect in the seventh inning, where a runner is placed on second base at the start of each inning. For the next three innings Cedar Grove pitcher Nicole Kelly, who pitched a complete game, and Verona pitcher Johnson dueled, not allowing a run.

In the bottom of the ninth, Verona fourth grader Hannah Maida started at second base. With one out, Verona third baseman Jordan Stafford advanced Maida to third base with a hard shot to second. Catcher Carlie Goldstien then stepped to the plate and drilled a grounder toward the second baseman, who had difficulty fielding this hot shot. Maida dashed and slid into home, and Goldstein beat the throw to first to win the game and Verona advanced to the finals, facing the eventual league champion Parsippany.

Over this season, a combination of solid defense by Mary Wallace and Mia Vega, strong hitting by Geena Klinger, Brooke Anquillare and Annie Swanstrom, and strong pitching by Johnson and Ashley Baumgard propelled the White to a most successful season! 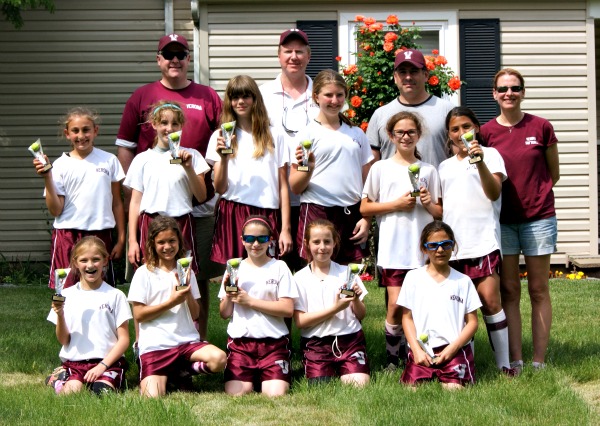