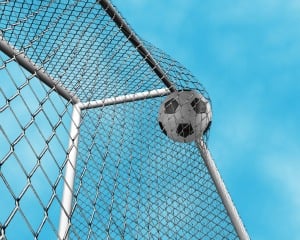 The meeting was as packed as a Verona sports event and sometimes as contentious. But in the end, the Town Council voted to issue $5.125 million in bonds to fund the construction of two multipurpose turf fields on the hill behind the Verona Community Center. The approval of ordinance 03-13 came after 10 p.m. Monday night, a fitting time since that is when many young players now leave Verona’s two Community Center fields because the fields are so solidly booked.

Council members Frank Sapienza, Bob Manley, Jay Sniatkowski and Michael Nochimson voted for the bonding; Kevin Ryan was opposed. Unlike most council decisions, which need a simple 3-2 vote to pass, a bond ordinance needs a so-called supermajority of four votes.

Many of the six dozen people who packed the Council chamber, stairs and ground floor lobby were there in support of the Hilltop Phase II plan, which has been in development since 2007. Steve Aldiero, the Verona Eagles’ treasurer, called the project “necessary and important for all the kids in this town.” Andy Yeates, president of the Verona Baseball & Softball League noted that VBSL has more than 500 boys and girls in 53 teams this year. “We have been successful in fostering a healthy lifestyle for our kids,” he said. But VBSL’s reliance on existing grass fields puts it at the mercy of the elements. Yeates noted that the rains last Thursday and Friday knocked out the schedule for Saturday, putting the League’s tight planning three days behind when it has only just started. Doug Smith, president of the Verona Lacrosse League, said that with now almost 350 kids in that program “lots of kids have to practice together”, raising the risk of injury.

Verona Environmental Commission Chairman Jerry Shimonaski said Joe Martin and town engineer Jim Helb finally met with the VEC to answer its questions about the project and, as a result, the VEC had no objections to it. By statute, the VEC can review all projects that go before the Board of Adjustment and the Planning Board for their environmental impact. Shimonaski had been asking Martin and Helb for documents on the Hilltop since last November to see how it would affect runoff and groundwater recharge in the area, a key issue because Verona relies on wells for its drinking water.


But even among those who favored the idea of additional fields, there were reservations. Pointing to the condition of the upper field at Verona High School, Gail Shepherd, a resident and realtor, asked why the town was not considering the condition of all fields in town. “You want us to spend more money on improving fields when we can’t even maintain the fields that we have,” she said. Though the VHS field and those of all the town’s public schools belong to the Board of Education, the BOE has ceded field maintenance to the town. Jessica Pearson, a Montclair Avenue resident who led the successful opposition to the proposed development near Everett Field, said the information on the Hilltop Fields seemed incomplete and asked for money to be set aside for turf replacement and maintenance. “I am a proponent of this,” she said. “I do want this to be done, but I want it to be done carefully.”

Rich Wertz, a former Wall Street executive who now teaches math at Verona High School, sought to allay concerns about the project’s debt structure. The town will initially use short-term notes and convert to 20-year bonds once construction is complete. “Rates are at 45-year lows,” he said of the debt market. “Short or long, it’s still going to be a great deal.” “If you think that the recreational needs of town are going to get addressed at a lower cost,” he added, “you are probably wrong.” (There may be some flawed assumptions about the PILOT funds that will pay back the debt. We’ll have a separate story soon.)

Council members then proceeded to lay out their thoughts. Sapienza, who serves as mayor, said he had gotten 110 emails in support of the project. “We will see increases in our property values,” he said. Manley called the project “compelling” and added “I was prepared to go forward with this in September 2012.” Sniatkowski said his years of coaching in Verona had convinced him that the fields were needed. He also noted that, in addition to the VHS field, Verona lost field space at Laning (when that school was expanded) and a baseball diamond at HBW. “It is time to let residents know, are we building these new fields or not?” he said. Ryan reiterated his long-standing concerns about Verona’s rising indebtedness and property taxes. “I think it would be worthwhile to sit down with the Board of Ed and see what we could do [on fields],” he added.

It fell to Nochimson to be the swing vote, and he set conditions that set the already tense debate on the Council even further on edge. Saying that “the process is wrong, not the project,” Nochimson called for a citizen oversight committee to review the bid documents and monitor construction work. He also demanded monthly updates on the project to the Council, with a goal of making the project come in $500,000 under the projected cost. An exasperated Sapienza agreed to add the town’s sports organization as a subcommittee to the Recreation Advisory Committee. But the agreement was not part of any resolution and it may prove to be flawed: Many of the town’s existing boards and committees are viewed as consultative and not the watchdog that Nochimson seems to want.