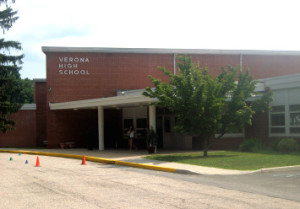 As Verona parents shared the fear and grief of parents in Newtown, Conn., Superintendent of Schools Steven A. Forte announced changes to school security that will bring uniformed officers walking through all six Verona public schools.

On Friday morning, a man identified as Adam Lanza killed 26 people in the Sandy Hook Elementary School in Newtown, including 20 children and his mother.

According to Police Chief Doug Huber, each Verona school will now be assigned an officer and the officers will walk through each building on most school days. Details about how long officers would be in each building were not made public.

The Connecticut school reportedly required visitors to be buzzed into a vestibule before gaining entrance to the main building. It is not clear how Lanza, who is said to have been heavily armed, got into the school.

It is too soon to tell whether the procedures will assuage the grief over the shootings, which was raw among Verona parents today. Some were openly talking about removing children from the public schools for home schooling and others debating the merits of more prominent security, including the presence of armed security guards, perhaps drawn from the ranks of retired police officers.