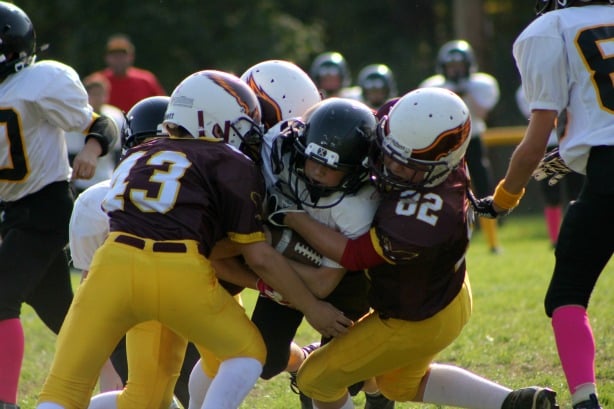 Two undefeated teams walked onto the field Sunday knowing only one would leave that way. That team was the Verona Eagles A Team who prevailed 6-0 over the Hanover Park Hornets in a hard fought battle.

Chris Aldiero set the tone for the game on the opening kick-off. Colin Kiernan boomed a kick deep down field; Aldo steamrolled two would-be blockers and tackled the kick returner at the 3 yard line.

Neither team would do much offensively on the first two series as they traded punts. On the Hornets’ third possession, a bad snap to the punter allowed Mike Stanisci and Chuck Cerle to swarm and tackle the punter setting the Eagles up in Hornet territory.

Mike “Mugsy” Mughetto ran a jet sweep around left end 35 yards for the score. The extra point failed and the Eagles led 6-0.

In the second half there were some positive plays: Jake “Hoot” Houthuysen had a 9 yard run, CJ Lavery ran for 12 yards, and Stanisci caught a nice pass along the right sideline. Penalties and turnovers prevented the Eagles from ever mounting any serious scoring threats.

Twice the defense had to stiffen following turnovers. The Hornets attempted numerous passes late in the game but Matt and Zach Zaccone as well as Lavery were up to the task, blanketing the receivers.

Now standing atop the league at 6-0, the Eagles will face the West Essex Cowboys on Sunday at Centennial Field. This will be the final regular season game so come out and watch as the boys try to continue their perfect season.

Coach Ed Shields Eagles B-Team won impressively for the second week in a row defeating The Hanover Park Hornets 22-6 at Lurker Park in East Hanover. The Eagles record improved to 5-1 as the final week of the regular season approaches.

On the Hornets first series, they elected to go for it on fourth down, and it proved to be a bad decision. PJ Jordan, Anthony Zamloot, and Pat Haughney burst through the line forcing a hurried pass and a turnover on downs.

On the Eagles’ first play from scrimmage Tommy Kellner ran around the right side for a 12-yard gain down to the Hornets 31 yard line. Following a penalty, Tom Sharkey dropped back and threw down the right sideline to Nick Riggio, who hauled in the pass and scampered for a 35 yard score. The extra point was stopped making the score 6-0 Eagles.

Defensively the Eagles came to play. Brian Hipp snuffed out a sweep, making a tackle in the backfield, and Matt Aldiero had two sacks – causing a fumble on one of them.

Following the fumble recovery, Matthew Frungillo had a 17 yard run. Sharkey then followed a Haughney block and bolted 20 yards to the Hornet 2 yard line. From there, Shark ran it in on a QB Sneak. Frungillo caught a Sharkey pass for the 2-point conversion and the Eagles were up 14-0.

Again the defense dominated. On 3rd and 10, Jordan burst through the line and crushed the ball carrier for a 5 yard loss to force a punt just before the half.

On the first series of the 3rd quarter, Zamloot caught a screen pass and rumbled for 20 yards. Sharkey then scrambled for a 25-yard gain down to the Hornet 25 yard line. Shark then passed to Matthew Frungillo down to the 3 yard line. Following a penalty, Sharkey would hit Riggio with a swing pass and Rig scooted into the end zone with the Eagles third TD of the day. Zander Zebrowski caught the conversion pass and the Eagles were cruising 22-0.

The O-line blocked well all day. Matt Aldiero, Matt Dollaway, Christian Dionisio, Zach Balogh, and Brandon Cariani all did a great job off pass protecting for Sharkey & Co. Nick Giuliano, Gus Caprari, and Issac Skrivanic all made tackles on the Hornets final drive.