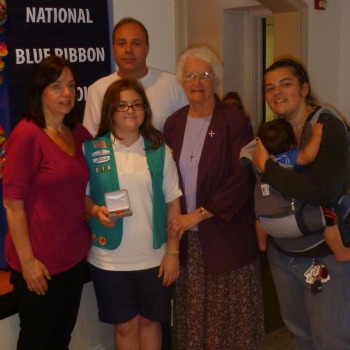 Olivia Fisher, a fourth-grade student at Our Lady of the Lake School and a member of OLL School’s Junior Girl Scout Troop 20515, was awarded the National Girl Scout Medal of Honor in late May. The Medal of Honor is rarely awarded, because it is only given to a girl who has saved a life.

While Fisher was alone in a room with her father, he fell suddenly into a seizure. Olivia had the presence of mind to alert her mother to the situation, call 911, provide the 911 dispatcher with all pertinent information and aid her mother in keeping her father safe until the emergency team arrived. Because of her clear thinking and immediate response, the Girl Scouts of America bestowed on Fisher one of its most prestigious awards. Tracey Giordano, leader of Troop 20515, nominated Fisher for the Medal of Honor.

Fisher was recently honored at an assembly at OLL School. Sister Mary Agnes Sullivan, O.P., principal of OLL School, and Father Michael Hanly, pastor of OLL Parish, joined with the entire school community to celebrate Fisher’s achievement and award and to express pride in what she did. As Mrs. Giordano noted in her remarks presenting the award to Fisher, “quite often we honor heroes in our lives, and frequently they are adults. But a young Girl Scout from Verona proved that you do not have to be grown-up to be an inspiration to your entire community.”

Girl Scouting is just one of many extracurricular activities offered at OLL School, a 2011 National Blue Ribbon School. OLL School has a rich Catholic school heritage of achievement and offers classes from Pre-K3 through eighth grade, with a diverse student body. For more information about OLL School or to arrange a tour or visit, please call 973-239-1160. Enrollment for the 2012-13 school year will continue over the summer months.