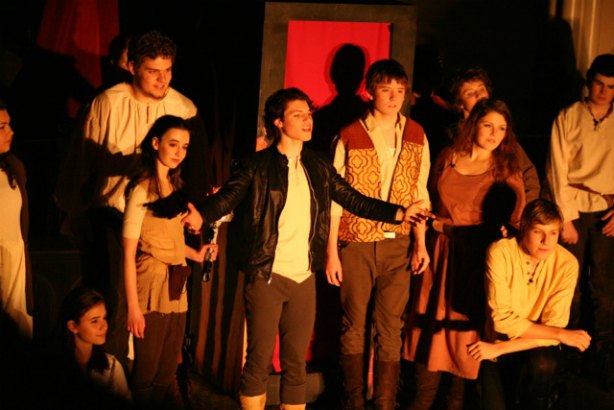 The First Presbyterian Church at Caldwell will be performing “Pippin” this weekend, May 11-13, and there are several familiar Verona faces in the cast and behind the scenes.

Verona High School junior Michael Hardenberg is the show’s lead, the role originated by Ben Vereen on Broadway. The Verona cast also includes Maura Cuddihy, Paul Salierno, Patrick Citrano and Colin Vega.  The kids have been rehearsing the show since last fall, and took it on tour to Georgia and Florida over February break.

Pamela Frank and David Fink, new Verona residents, are part of the show’s adult advisor team, and help with hair,  makeup and music. Reverend Barbara Piercy is First Presbyterian’s minister of music and Noel Piercy is its associate director of Music. Adriana Piercy, a VHS grad who now performs with the Miami City Ballet, is the show’s director and choreographer.

If you’re not familiar with “Pippin”, it is a musical loosely based on the story of King Charlemagne and his son, Pippin, but more broadly a story of coming to terms with friends, family and life.

Show times are 7:30 p.m. on Friday and Saturday, and 6 p.m. on Sunday, and there is a suggested donation of $10 per ticket. First Presbyterian is in the center of Caldwell at 326 Bloomfield Avenue.