You might remember that, last year at this time, we brought you a story about Specs, a yellow lab that was being raised by a young woman in Verona for the Seeing Eye. It’s a tough job for volunteer and dog, and not every puppy that is in the initial socializing program is accepted into the Seeing Eye’s full five-month training program. Even once accepted, not every dog turns out to be right for placement with a Seeing Eye client. But Laura Williams, now a VHS junior, got word recently that Specs has made it through the full training program and has been placed with an owner.

According to the Seeing Eye, Specs has been placed with a retired university professor in Georgia. Specs will be helping the man around his home, on his walks through the park and on his trips downtown by bus. The Seeing Eye praised Williams for her work with the dog:

“Throughout class, Specs’ handler was very impressed with the quality of his work. The new team had a smooth transition and Specs bonded with his new master quickly. On one trip, his handler was very impressed with Specs’ ability to guide him down a sidewalk scattered with garbage cans from the morning garbage pick-up without bumping into any of them along the way! Specs’ owner loves his gentle temperament and his happy-go-lucky nature. He knows he will be an adored buddy and playmate when the grandkids come to visit. I am confident that Specs has many happy working years ahead of him in his forever home.

Williams, meanwhile, is fostering a new Seeing Eye candidate. His name is Empire, and he is already an empire-sized 40 pounds at just four and a half months old. “He is very sweet,” says Williams’ mother, Marjorie Williams, “and Laura claims he’s too smart for his own good!” 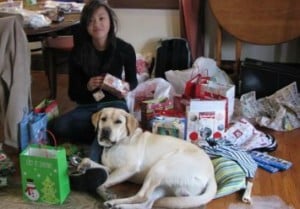 Empire is Williams’ fourth foster dog. Vadin, the black lab that was her first dog, was placed in Texas, but her second dog, a German shepherd named Wendy, did not qualify for placement. A well-trained dog is important because, despite all the adaptive technologies that have been created for the blind, guide dogs are still key to their independence. The Seeing Eye, based in Morristown, relies on a network of volunteers to raise hundreds of German shepherd, Labrador Retriever and golden retriever puppies for the blind. Williams became one of those volunteers in 2008, and juggles puppy raising with band, track and a full academic schedule.

A volunteer spends about a year and a half raising each puppy, which includes socializing and walking the dogs and taking them to group classes with other puppy families. The Seeing Eye takes care of veterinary costs, the puppy crate (all dogs are crate-trained) and some food costs. You can learn more about the program here.

Here are some photos of Williams’ dogs.
[nggallery id=94]