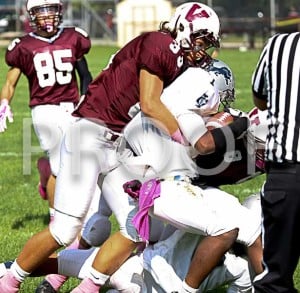 The Verona Hillbillies, playing on their home turf for the first time this season, defeated the Montclair Immaculate Lions 35-7 on Saturday. Verona struck early when freshman quarterback Frank Ferrari lofted the ball high into the corner of the end zone where senior Captain Billy Meade out-jumped the Lion defender to put Verona ahead 6-0. Frank Greco who was perfect kicking extra points all game put the ball through the up rights to take a 7-0 lead.

The Hillbillies struggled to handle the ball in their next two possessions fumbling twice. To start the second quarter, a costly penalty nullified Greco’s TD dash. However, on the next play from the line of scrimmage linemen Nick Rollo, Ryan Flood, Tom Cundari, Joe Pami and Luke Weiss blew open a hole that Ferrari easily found and scampered 30 yards for the Hillbillies second TD of the day.

Looking for a big play, Verona head coach and Immaculate alumnus Lou Racioppe called upon Junior QB Dean DeNicola. DeNicola, slowly working his way back from an ankle injury that has relegated him to limited action over the past two weeks, hit WR Michael Harrington on a 65 yard TD strike. Before heading into the locker at half time, Ferrari, back at the helm for the Maroon and White, saw junior TE Luke Sniatkowski across the middle and hit him for another TD to put the Hillbillies up 28-0 at half time.

Defensively for the Hillbillies seniors LB Joe Pami and Dariush Taghavi, along with junior Alex Dellavalle and sophomore Matt McKeown led the way most of the afternoon but it was senior corner back Franco Camerota’s timely interception that set up the Hillbillies 5th TD of the day. Camerota dropped back in pass coverage, picked the ball off and ran 30 yards down to the Lions’ 5 yard line. Senior captain Jack Cummings took it from there and powered the ball through the end zone to put the Hillbillies up 35-0.

For the second time in two weeks Coach Racioppe was able to make some changes. Heading into the 4th quarter, Verona’s offense was led by tackle Joe Cordasco, running backs Matt Intili and Jimmy Crawford. As the game came to a close and with Immaculate once again threatening to score, defensive tackle Kris Alteni and DE Anthony Benenati flushed the Immaculate QB out of the pocket, enabling freshman Mike Cifaretto to make a hard-hitting game-ending sack.

With Saturday’s win, the Hillbillies’ state playoff hopes are still alive. Next up, Verona travels to Newark to play Central High School. Kickoff is at 1 p.m.