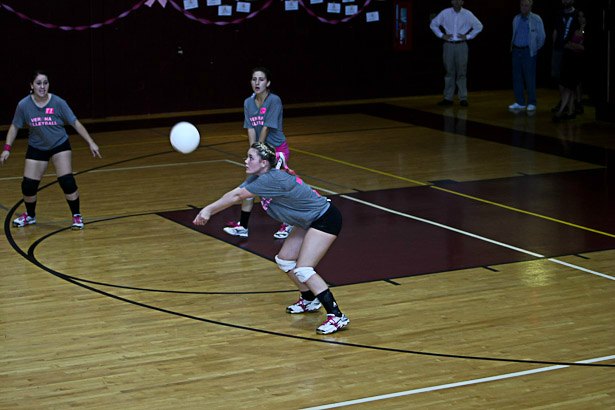 Verona’s volleyball team swept neighboring rival Cedar Grove 25-17, 25-21 in front of a packed house Thursday night in Verona. Casie Milmoe led the Hillbillies with seven aces, two kills and four digs. Victoria Purcell had four kills, a block and a dig. Emily Symons led the team with 12 assists. The victory was their second in two days moving their record to 9-8. The game had been billed as a “pinkout”–the team’s fundraiser for Breast Cancer Awareness month–so there was lots of pink on players and spectators.

Verona girls soccer fell to Newark Academy 2-1. Newark Academy jumped out to a 2-0 lead in the first half before Verona’s Olivia Marino scored in the second frame. Senior Alison Sprong had nine saves in the goal for the Hillbillies. Verona’s record stands at 5-6.

The Hillbillies dropped a tough match to Leonia HS 3 matches to 2 yesterday. In singles Jackie Noyes and Ashley Stockwell were swept in straight sets before Ciarra Davison was able to pull out a point for the Hillbillies. The doubles team of Caroline Chivily and Briana Tedesco won their first doubles match 6-3, 3-6, 6-2. Verona’s record for the year is 8-6.
[nggallery id=157]
All photos © Fred Goode Productions. All rights reserved.