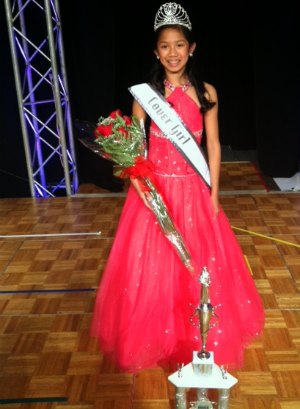 One hundred forty-two girls ages 10 to 12 from across the state competed in the pageant. She received her official state crown, banner and trophy, and a special invitation to compete at the National Pageant held during Thanksgiving Week in Anaheim, Calif. At the state pageant Cianna was also named the Top Model winner, Art Contest Winner and was 1st Place in Talent, Spirit of America and Portfolio Awards. She was also named a NJ State Ambassador. Cianna chose to enter the state pageant this summer to increase her confidence speaking in front of an audience.

The National American Miss Pageants are dedicated to celebrating America’s greatness and encouraging future leaders. Each year, the National American Miss Pageants awards $1.5 million in cash, scholarships and prizes to recognize and assist the development of young women nationwide. This pageant requires that all girls under 12 not wear make-up in the pageant, and that the girls present themselves on stage with an introduction. Cianna’s speech was entitled “Kids Can Make a Big Difference.” The pageant program is based on inner beauty, as well as poise, presentation.

Cianna is actively seeking sponsors for the national pageant. Please contact the Winkler family by e-mail if you or your business is interested in being a sponsor.