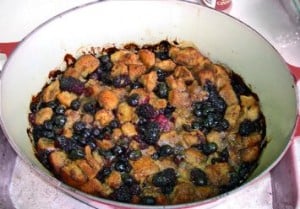 This recipe is courtesy of Cardie Mortimer, Verona resident and chef. As Cardie and I were writing to each other about cinnamon and how much we both love it, he sent me this recipe which uses blueberry wine from his brother’s winery in Sussex County.

Mortimer says, “here is a dish I designed several years ago which also incorporates cinnamon. My brother owns one of the best wineries on the East Coast. It’s called Westfall Winery and it’s located in Montague, NJ (right near High Point)…It’s only an hour or so away from Verona. The Cardie Cooks team is working on a cookbook of recipes using Westfall’s incredibly tasty fruit wines. We hope to have a finished book by sometime early next spring.”

A cookbook of recipes featuring local wines and a local chef? I’m in! Here is Cardie’s recipe- Enjoy!

2 cups half and half or whole milk

This is best served with a good brand of vanilla bean ice cream.

Leftover pudding can be stored in the refrigerator for 3-5 days.

**Westfall Winery is owned by Loren Mortimer and his wife and partner Georgene. Customers can purchase the Stella Blueberry wine at various liquor stores around the state. Those retail outlets listed on his web site, Westfallwinery.com.

- Advertisement -
Previous articleEarthquake!
Next articleMath-a-Thon Adds Up For Cancer Patients