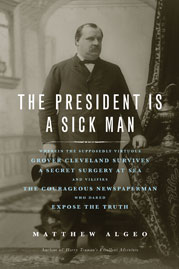 If you grew up in Verona, there’s a better than even chance that you went on a field trip to Grover Cleveland’s birthplace on Bloomfield Avenue in Caldwell. Girl Scouts and Boy Scouts went there, and often entire elementary school classes. You learned about how Cleveland dressed as a child and what toys he played with. You learned about what Caldwell was like in the early 1800s.

You most certainly did not learn that Cleveland, who grew up to become the 22nd and 24th president of the United States, disappeared from Washington for five days during his second term and had a secret operation on a yacht in Long Island Sound to remove a cancerous tumor in his mouth.  You also didn’t learn that when a young reporter discovered what had happened and wrote about it, he was branded a liar by the president’s entourage.

Yet that is exactly the subject of a new book, The President Is A Sick Man, whose author, Matthew Algeo, will be in Montclair for a book signing this Thursday, May 19. Algeo, a self-professed “fan of presidential trivia” and the author of an earlier book on a quirky road trip that Harry S. Truman took, got the piece of trivia that started him on the Cleveland book 10 years ago: He discovered that the tumor taken from Cleveland’s mouth was preserved at a medical society in Philadelphia. He slowly unraveled a tale of financial panic (America was in a recession deeper than ours in 1893), political intrigue and a disease that, while greatly tamed in our era, still invokes fear. Ulysses S. Grant had died of an oral cancer in 1885, and the newspaper accounts of his illness were still fresh in the public consciousness when Cleveland found his tumor.

Algeo, who visited Caldwell several times while researching the book, notes that Cleveland’s cancer was much different than Grant’s, and likely would not have killed the president. “But Cleveland lived the rest of his life in mortal fear that the cancer would return,” he says, something that probably affected how Cleveland treated the reporter who broke the story, E.J.Edwards. “I think Cleveland went farther than he should have,” says Algeo. “To deny the report was one thing, but to discredit the reporter was quite another.” (Edwards went on to work for a then fledgling newspaper that still employs several people in Verona today: The Wall Street Journal.)

Despite the way Cleveland handled the operation and the press, Algeo remains full of respect for the president. “He was a man of integrity and had the best interest of the country at heart.”

Matthew Algeo will be at Watchung Booksellers on Thursday, May 19 from 7  to 9 p.m. talking about his book. You can get more details here.