A Place To Honor Alumni 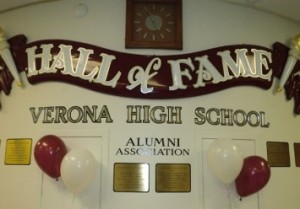 Since 2004, the Verona High School Alumni Association has been holding annual dinners to honor graduates of VHS and people who have made significant contributions to the school. The Hall of Fame has honored 30 individuals so far, and several entire teams of athletes. The dinners were lovely and the memories divine, but what the VHSAA has wanted, almost more than anything, was a place for those honors to live on after the dishes and champagne glasses were cleared. A place that would keep the Hall of Fame inductees’ accomplishments in the minds of the students at VHS today.

Last week, it finally got that place.

At a ceremony on Wednesday, November 24, the VHSAA unveiled the Verona High School Wall of Fame. It commissioned a sign from Matthew Beneduce McGrath to wrap the wall of the most prominent spot in VHS’ lobby.  Beneath it are plaques listing the names of all those inducted into the Hall of Fame, by year.

In attendance were many of the inductees  from the past six years including Deborah Kloss Festa, VHS Class of 1985 and former Superintendent Thomas Sellitto, both inducted into the first Hall of Fame in 2004; Laning elementary school Principal Frank Albano (VHS 1975, Hall of Fame 2005); Steve Janett (VHS 1974) and Mike Inglesino (VHS 1960) for the 2006 Hall of Fame; Amy Tortorella McCarthy (VHS 1990) and George Stiefbold, longtime VHS soccer coach for the 2007 Hall of Fame; Rutgers baseball coach and honorary Hillbilly Fred Hill Sr. (Hall of Fame 2008); and from the 2009 Hall of Fame Mike Passero (VHS 1971), Tim Bannon (VHS 1973) and Terry Dean (1942 golf team).

Because of the unveiling, the VHSAA did not hold a Hall of Fame dinner this year. If you have someone you’d like to nominate for 2011, the deadline for next year’s award is June 1 and the rules are here.