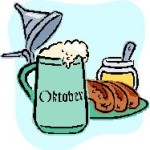 This past Saturday, Our Lady of the Lake hosted an Oktoberfest that was its first, but will almost certainly not be its last. Over 1,300 people attended–dining, dancing and drinking the night away in tents that almost completely covered OLL’s very large parking lot.

Jill Corrigan, who was one of the event’s planners and coordinators called the evening “wildly successful” and it wasn’t a boast. OLL’s Oktoberfest was as well planned as it was well attended. There were plenty of stations for food, beer, and yes, bathrooms. My compliments go to Father Bryan Page and his Oktoberfest committee, who pulled off an excellent evening with not a single noticeable glitch. The event was a fundraiser, complete with a 50/50 raffle, tricky tray baskets, and a silent auction (including a dinner at CulinAriane), but it certainly didn’t feel that way. It felt like a fabulous outdoor party and even the event planners were struck by the sheer volume of support it had, including that of OLL alumni.

The lead sponsors were Janek’s Quality Caterers, Cape May Winery, Investors Savings Bank and Hillcrest Farms, followed by gold sponsors Foodtown and Frank Anthony’s.  The list of silver and bronze sponsors was quite long, but many of Verona’s local businesses provided food such as Eight Hills Caterers,  O’Neil’s Restaurant & Pub, Mardi Gras Fine Foods, and DiPaolo Bakery, to name a few.  While I stuck with the German fare, everything looked delicious and I don’t think I’ve ever seen so much German Chocolate Cake in my life.  There was a fine sampling of different beers from homemade to mainstream breweries like Sam Adams and Yuengling.  The range of food was enough to fit all tastes: Three different kinds of bratwurst, hot potato salad and warm apples, turkey, stuffing, mashed potatoes, rolls and an array of desserts.

While I was only familiar with one of the bands, all of the music choices were excellent. It was like being at a concert. The night started off with traditional German folk music and then moved on to Trick Tenza followed by Liz Wojtal & Next of Kin and Pet in the Middle, fronted by Tom Jacobsen, Verona’s own building inspector. There were plenty of people dancing into the night and the bands kept the music going until the last song, Hit the Road Jack, was played and we all hit the road.  I certainly did my share of dancing and singing with the bands.

My favorite thing about the evening was that the food kept going all night. While the majority was eaten early on, I personally enjoyed my second bratwurst around 11 p.m. My second favorite thing was that there was no line for the Porta-Potties. Plenty were provided which kept things and people moving. At the end of the night, buses were provided to get people home–what a great and safe service!

Our thanks to Patricia Bertron and Rita Mughetto for the photos.