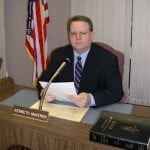 Ken McKenna officially resigned from the Verona Town Council at Monday night’s meeting. Council members and several residents hailed McKenna for his involvement in the community, both as a volunteer over more than two decades and as a council member since 2005. “Ken cares deeply about the people in our community,” said Mayor Teena Schwartz. Bruce Williams thanked McKenna for his support for scouting in Verona over the years.

McKenna was overcome with emotion as he thanked the well-wishers. “It has been a pleasure and an honor to serve the citizens of Verona,” he said. “As I look around this dais, I know that Verona is in good hands.”

According to Verona Town Manager Joe Martin, the council now has 30 days to decide whether to appoint someone to serve in McKenna’s stead through the council election next May; the council does, under state law, have the option of leaving the seat vacant. In May, interested candidates may vie for the remaining two years of McKenna’s term.