Is This His Year? 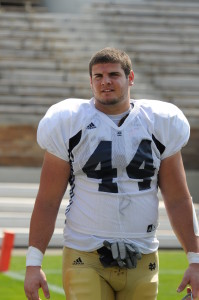 Carlo Calabrese was a standout on the field for the Hillbillies football team. This September, Calabrese is a sophomore at Notre Dame and he’s is generating a lot of positive talk. The kind of talk that could lead you to think that this year will be a big year for the Verona native, and the Fighting Irish.

This past weekend, the South Bend Tribune, which is more or less the hometown paper for Notre Dame, had a lengthy profile of Calabrese. The Chicago Tribune did too. And the Web site of the university’s athletic department had a video interview, which you can see in the right-hand column of this page (alas, Notre Dame does not seem to allow its videos to be presented elsewhere).

The South Bend Tribune singles Calabrese out as the “most intriguing” of of the team’s wild cards. Yes, this is the Midwest, and the East Coast still has a whiff of the exotic. But the story notes how Calabrese is deeply attached to his family, paying an unusual tribute to his mom and grandfather through tattoos. It also notes his unofficial role as team barber to the Fighting Irish. He hasn’t yet cut the coach’s hair, but the story, which you can read in full here, has that “anything is possible” feel to it.

Calabrese will get his first big test of the season this Saturday, when Notre Dame faces Purdue. The Journal Gazette of Fort Wayne says he’s a start at linebacker.