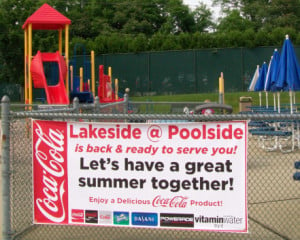 The changes at the Verona Pool this season start before you even get past the badge check.

The parking lot has been repaved from top to bottom except for the side lot closest to the  former hospital grounds. The paving added a pedestrian walkway that extends from the upper lot to the main gate. That will make it easier to schlep all the gear from your car, but it takes away 4 parking spots. With membership up at the Verona Pool this year, it could be a better idea than ever to take just one family car to the pool if you can. The repaving also added 4 handicapped parking spots in lower lot on either side of the walkway.

There’s new lighting in the lots as well. The pool has added several of the semi-Victorian lampposts that were installed around the civic center two years ago, and adorned them with flower baskets full of petunias. New trees have been planted above the upper lot next to the tennis courts. 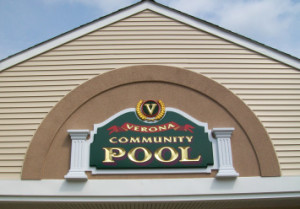 And then there’s the sign. More than 40 years after its creation, the Verona Pool has been outfitted with big new sign over the entrance, in the same style as the signs at the Montclair edge of town and the entrances to Verona Park.

Inside the pool, you already know of two of the big changes, the return of Lakeside Deli to the pool concession stand and the installation of a Wi-Fi Internet connection. The latter is not yet operating, but should be soon. It wasn’t stopping some pool-goers today from hoping there would be a way to connect the concession stand and the Internet so that they could order or be notified to pick up their food from their tables. (Not yet. We checked.)

The Lakeside staff are wearing royal blue shirts, while pool management is wearing light blue. Last year’s manager, Dennis McGarrity, is back for a second season. You’ll probably be talking to pool management a lot in the early weeks of this season because all swim lessons, individual and group, must now be booked through the pool office.

If you are a fan of the big slides and you have a sensitive back, you will be happy to learn that the slides have been given a tuneup that eases some of the bumps between the sections. The picnic area behind the slides will be undergoing some changes too: Plans are in the works to turn it into another rentable party space since the Gazebo is usually fully booked. Not clear yet what the transformation will entail or when it will be done, so keep your eyes open. 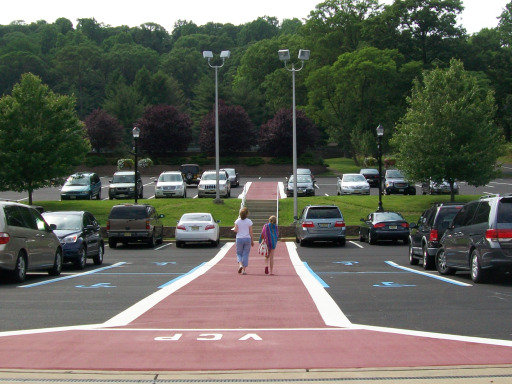