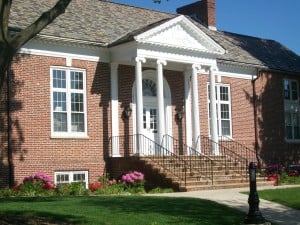 If you use the Verona Public Library to borrow books from other libraries, you’d better be a speed reader: The service is shutting down June 30.

This is not something that Library Director Jim Thomas wants to do, but he’s got no choice. Gov. Chris Christie has proposed $10.4 million in cuts to New Jersey’s public libraries, which is a 74% drop in funding. The state cuts would also trigger the loss of at least $4.5 million in federal matching funds. Library managers across the state are preparing to shut down services like the Inter-Library Loan system, and  trying to get a read on what lies ahead.

“I don’t think a lot of legislators realize what’s on the line if they make these cuts,” says Thomas.

Perhaps they think that, in the age of the Internet, nobody goes to libraries any more. Thomas understands that thinking–he has a Kindle and uses it. But he notes that the Verona Public Library is visited by more than 45,000 people every year and circulates about 75,000 items. “Our computers are taken all day long,” he adds. “People are at our doors on Sundays waiting to use them. Go figure.”

The Inter-Library Loan system that is now on the chopping block seems a natural complement to the Internet. “People are into very obscure or technical subjects now,” Thomas says. “Even if we had the money, we wouldn’t be able to store all these books. It is much easier to get them from a university or a large library system. Our patron is happy and we didn’t have to go out an buy that book.” Verona currently gets deliveries from the Inter-Library system four days a week.

The proposed budget cuts would also take away Verona’s access to easily searchable databases of academic and technical publications and periodicals, a statewide summer library program and continuing education programs that are required for the library’s staff and its trustees. Verona also would lose access to specialized collections, such as large-print books. The library has been bringing in groups of large-print books on a three-month rotation, to keep its offerings fresh. “It would be hard to build up a collection like that,” Thomas says, “because people read them so quickly.”

Ironically, the Verona Public Library would not lose access to the Internet, since the library’s Web connection is provided by the town. But town libraries that use a state-funded connection wouldn’t be as fortunate.

“The library community realizes that we are not immune or above the cuts and libraries are used to operating on shoestring budgets,” says Thomas. But what he, and the hundreds of N.J. librarians who went to Trenton this past Wednesday to protest the proposed budget want are cuts that are proportional to other state departments, which are now pegged at 10% to 15%. The rally was organized by Save My NJ Library, an arm of the New Jersey Library Association.

There is speculation that the governor’s aim is to force the consolidation of smaller libraries, but there may not be much in the way of savings in that. Current New Jersey law mandates a full-time certified library director in towns with more than 10,000 residents. Verona is above that threshold, but Caldwell, Glen Ridge, Essex Fells, Fairfield, North Caldwell and Roseland are not. Glen Ridge has voted to cut 2 of its 8 full-time positions, while Montclair, which is also facing town budget cuts, has closed its main branch on Mondays.

MyVeronaNJ called the offices of Verona’s representatives to the state Assembly and Senate to get their position on the library budget cuts, but our calls were not returned. The NJLA has set up a form for sending an e-mail to legislators to voice your opinion.