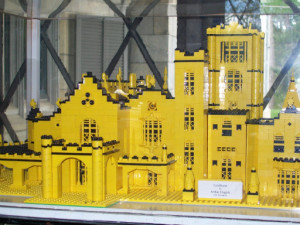 Whether the LEGOs that dominate your house are bricks or Bionicles, you’ll want to know about the LEGO festival that is going to dominate Lyndhurst castle in nearby Tarrytown, N.Y. next weekend.

What will you find when you get there? Arthur Gugick, a math teacher who is one of the world’s top LEGO builders. He’s recreated the Coliseum and the White House in LEGO, and that’s his model of Lyndhurst in LEGOs on this page. Gugick brought his models of the Dome of the Rock, the Taj Mahal and Theed Palace (Star Wars Episode I ) to last year’s event, as well Van Gogh’s Starry Night constructed entirely from LEGO dots. Of interest to the kids who have been through Forest Avenue teacher Kevin Jennings’ LEGO Robotics after-school program: There will be an award-winning LEGO Robotics team and Lee Magpili, a LEGO Robotics instructor at the Lower Hudson Valley Challenger Center. There will LEGO car races, LEGO stop-motion videos and a whole lot more, including displays of LEGO creations by local kids, including at least one from Verona.