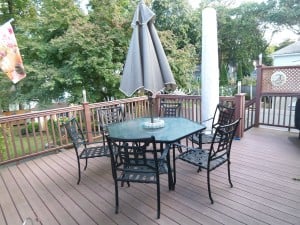 If you are in the market for a big house, you’d question the sanity of any Realtor® who suggests you consider a cape. Verona has dozens of capes, and they are all the size of a shoebox, right?

Well, be prepared to put aside your cape preconceptions at 43 Forest Avenue. Sure, it looks like one from the front and the living room is a classic cape parlor. But when you turn to the right and discover that what would have been the classic cape’s first-floor master bedroom has been turned into an intimate dining room, you might begin to suspect that something else is going on here. Take a look at the listing sheet again, and you’ll see this cape advertises 4 bedrooms and two full baths.

A bit of disclosure before I proceed: I discovered, when I met the homeowner, that my dad was his Realtor® when he bought the house 32 years ago. I’m probably going to run into this a lot as I write about houses in Verona, since my dad regularly tallied up a million dollars in real estate sales a year here in an era when houses could be had for $25,000. But I have no memory of the sale, and I had never been in this house before. 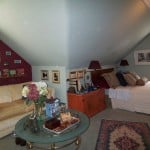 The bedrooms here are not huge, but you could put a few kids in them and they have plenty of storage space. The two biggest bedrooms, both upstairs, have architectural details–a window seat in one, a reading nook in the other–that make them seem more like a B&B you’d pick for a romantic weekend away. The kitchen isn’t huge, but it has been well-remodeled and it opens into a big family room addition (which could fit a 63″-inch plasma screen on one wall and still have room left over).

I suspect though, that it is going to be the deck off the family room that is going to clinch the deal on this house. It’s a no-maintenance Trex deck and it comes with a rotating umbrella that has an iPod dock and Bose speakers built it.

Quibbles? Yes, two. The upstairs bathroom has been renovated, but it lacks the decorating panache of the downstairs bathroom. And you might want to swap the acoustic tile in the upstairs ceilings for plaster at some point. But overall, move-in-ready doesn’t get much more move-in-ready than this. The house is listed by Palma Quagliata and Juan Carlos Fernandez at Prudential New Jersey properties.