Football Finds Redemption In A 56-6 Win

Verona and Belvidere faced off last Thursday on the field in the first round of the North Jersey Regional Consolation Tournament, and it certainly was a game to watch. Touchdown after touchdown, score after score, and memorable moments to boot.

The game started off with Belvidere kicking off to Verona. It was an onside kick and Belvidere managed to recover, but Verona then shut them down until fourth down. Belvidere then passed for a 50-yard touchdown. Verona, snapped into action, and playing a lose and be kicked out tournament, knew it needed to fight back. Catching the onside kick, Verona started at the 50. The following plays were dominant 10-yard rushes from #4 Luke Cerle (running back, linebacker) and a few rushes by #10 Connor Demasi (quarterback). Cerle then ran in with a touchdown. Verona was up 7-6. On the next drive, Belvidere’s runs were stopped by tackles from Cerle. When they passed the ball, #3 Gianluca Checchetto (cornerback) intercepted the ball and ran for a touchdown. 14-6. With a quick stop, Verona took the field. After a few rushes by Demasi, #23 Zach Garmont (receiver, cornerback) motioned and ran the ball in for a touchdown, 21-6. While on defense, Belvidere’s fumble was recovered by #53 Joel Gonzalez (linebacker). The next play, a 20-yard rush from Demasi scored another Verona touchdown, 28-6. After a few more rushing stops, a long throw by the Belvidere QB was intercepted by #1 Alex Rodriguez (receiver, cornerback). Finally, the first quarter came to a close. 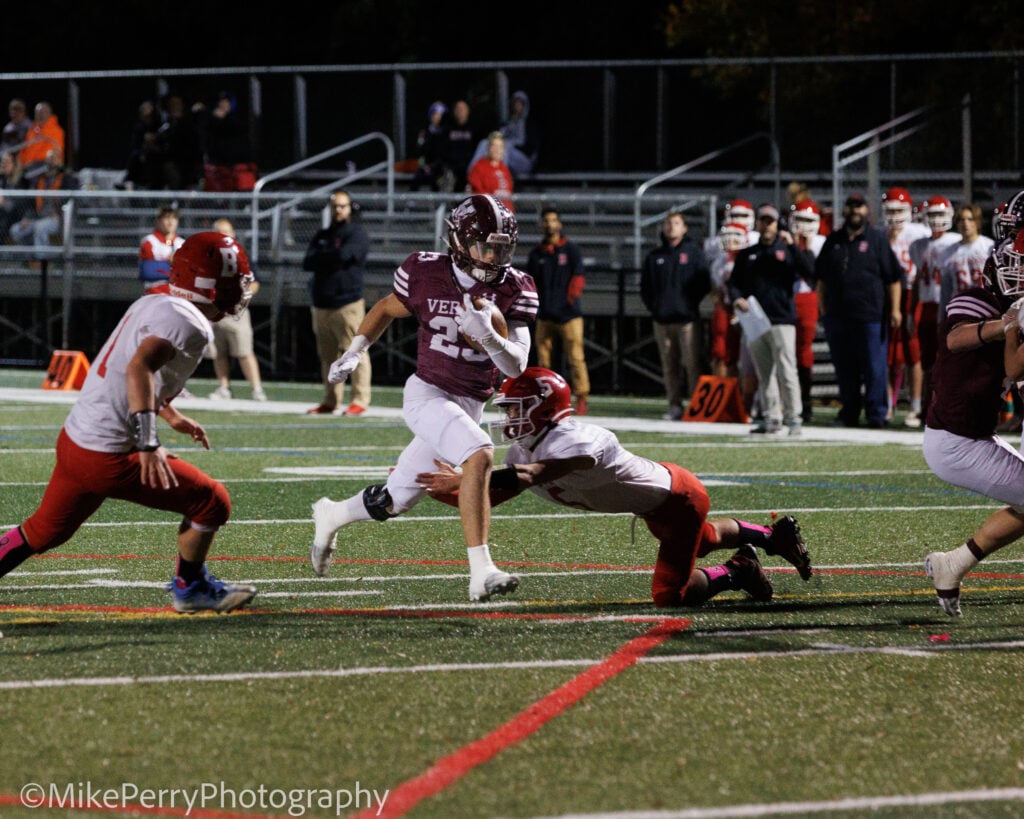 However, the game wasn’t finished just yet. Verona, on offense, opted to give #20 AJ Nigro the ball on a motion. He then ran 65 yards for another Verona touchdown. 35-6. After tackles for a loss by #27 Daniel Kozachuck (running back, linebacker) as well as Cerle, Belvidere was forced to punt. Rushes from Demasi brought Verona to the Red Zone. Usually a center, #51 Andrew Boyle changed into #87 and lined up at tight end. Then, on a 20-yard pass, Boyle got a touchdown, 42-6. On the next drive, an interception by Rodgriguez caused another turnover. In the next play, #42 Marc Nigro (running back, linebacker) ran for a touchdown, 49-6. After a few more back-and-forth drives, the half came to a close.

The third quarter started with a touchback by #2 Kieran Patel (kicker, punter). With the run again not producing results, a long pass was intercepted by #8 Jesse Wagner (receiver, quarterback, cornerback). With this, more junior varsity players began to go in, and #32 freshman Luke Freedman (running back) ran 45 yards to the 3 yard line. In the next play, Wagner ran for a touchdown, 56-6. After a kickoff, the third quarter came to a close. 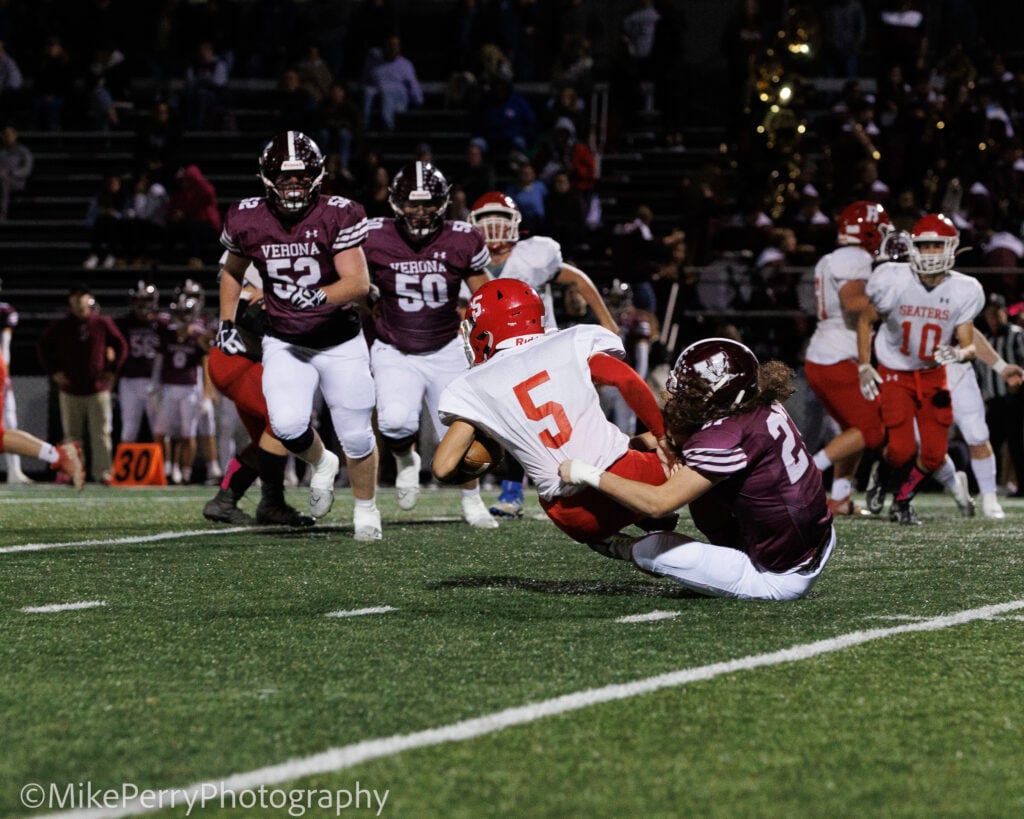 In the fourth quarter, the game stood at a standstill, with no team scoring additional points. Many Verona players got their first varsity snaps, such as freshmen #37 Anthony Vargas (receiver, defensive end) and #82 Aidan Serfaty (receiver, cornerback). As time expired, the players lined up and wished the other teams the best of luck.

The game was an apparent success for the team and the Verona spectators in the crowd. “I thought we played well,” said Boyle, “and it was good to get one of those kinds of wins under our belt.”

Verona will play Hawthorne this upcoming Thursday, November 3, at 6 p.m. on Sellito field. The game promises to be a closer contest, but Verona promises to arrive prepared. 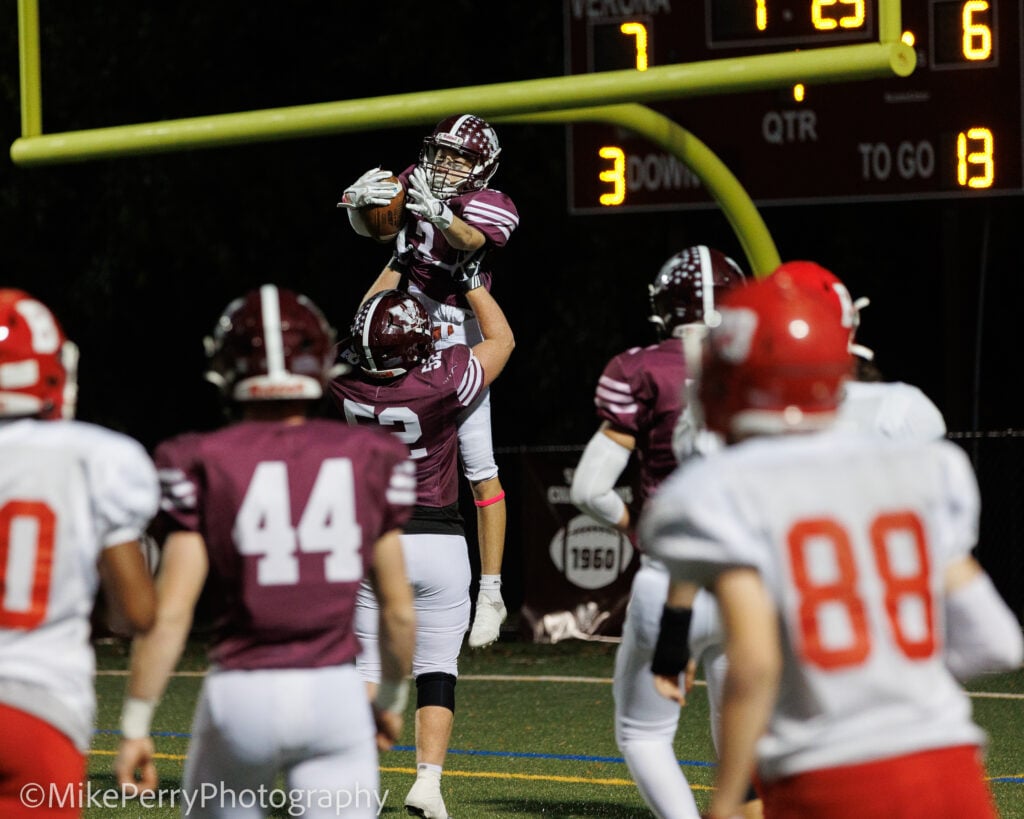