Football Heads To Consolation Round After Hanover Park Loss

The last time Hanover Park and Verona played, Verona got a 59-56 win. This year, Verona was not as lucky, with playoff hopes extinguished but a new endeavor to come.

Verona received the kick at the start of the game. The drive looked to be shut down by the defense until a 25-yard throw to #23 Zach Garmont (receiver, cornerback) managed to move the ball. Passes to #1 Alex Rodriguez (receiver, safety) and runs by #27 Daniel Kozachuck (running back, outside linebacker) brought Verona to the 35, where it was forced to punt. With Hanover Park’s possession, wrap-ups by #42 Marc Nigro (running back, defensive end) and #52 Shane Costigan (guard, defensive tackle) made the offense work for every yard.

However, as the second quarter opened, a determined run to the inside by Hanover Park scored a touchdown. The succeeding Verona drive was unsuccessful, and Verona was forced to punt. A tackle for a loss by #44 Bodie Maisano (running back, linebacker) and a pass breakup by Rodriguez caused another punt. Backed up to their own end zone, Verona was unable to get a pass off, resulting in another punt by #2 Kieran Patel (kicker, punter). Hanover Park slowly drove down the field and scored another touchdown. Verona, unable to run the ball, again punted. However, Verona stopped the following drive and achieved great field position via a 25-yard return from Rodriguez. However, a sideline interception meant the encouraging drive could not materialize into points. A failed Hanover Park drive closed out the first half. 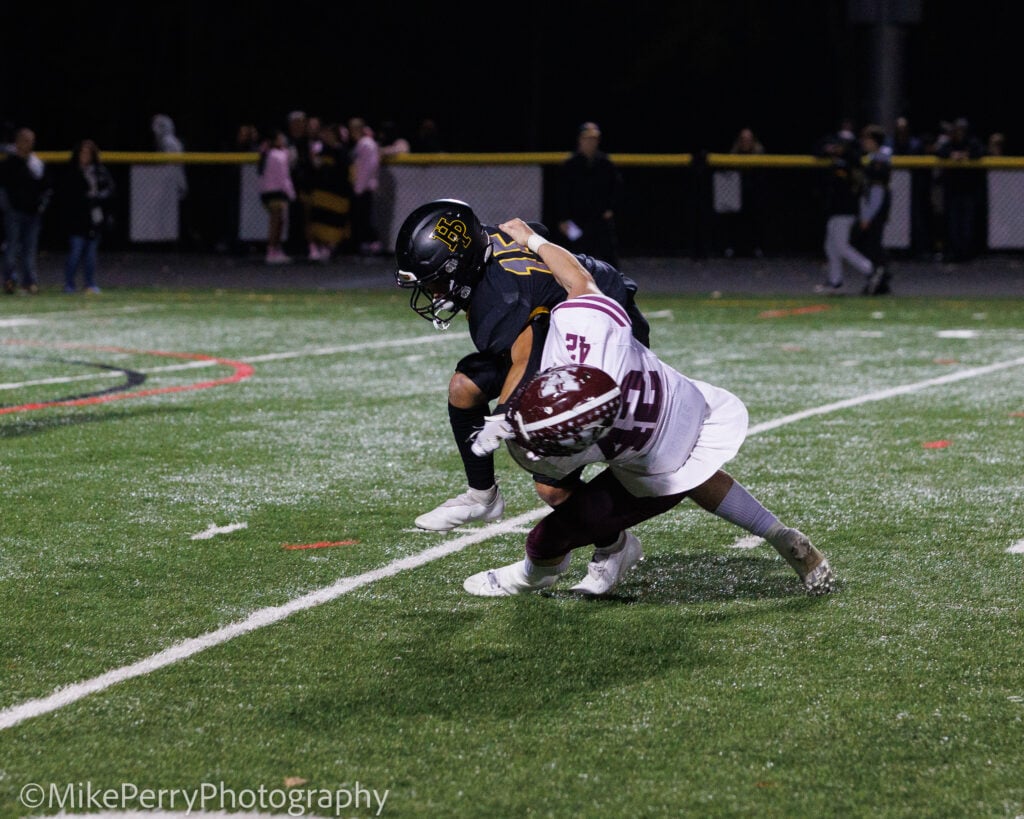 At halftime, Verona Captain #51 Andrew Boyle (center, defensive end) was named the Super Football Conference’s Steven Gregorio Young Man Of The Year. Boyle, discussed in last week’s article about football’s seniors, is a good student and is highly esteemed around the team. 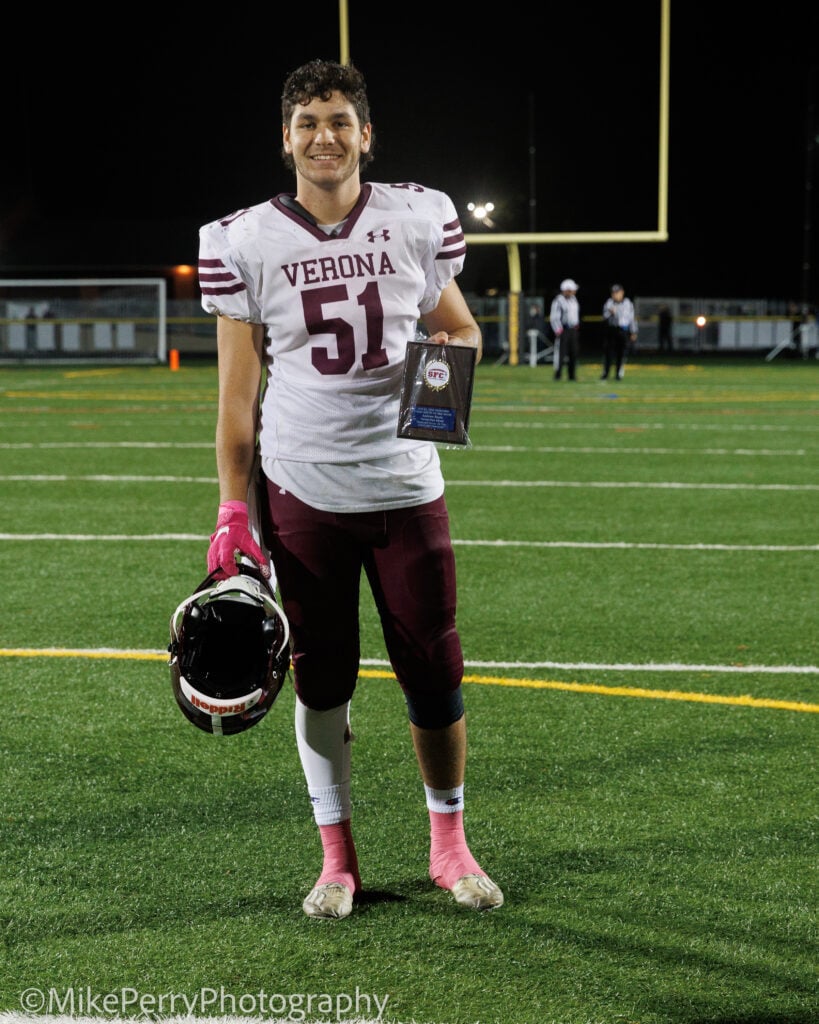 The second half started off with Verona on defense, and the first play resulted in a quick tackle by #4 Luke Cerle (running back, linebacker) and then a tackle for a loss by Marc Nigro. Finally, #3 Gianluca Checcetto (receiver, cornerback) broke up a 15-yard pass. These plays caused a Hanover Park punt and gave Verona back the ball. This time Verona was much more prepared. A 10-yard rush from Cerle was followed by a sequence of passes that brought Verona within 2 yards of the goal. However, Verona was still at the 1-yard line on fourth down after three attempted rushes and QB sneaks. Coach Batty made the fateful decision to go for it, and Verona scored. An extra point by Patel brought the score to 14-7 with three minutes remaining in the third quarter. After receiving the ball, Hanover Park pushed to the Verona 40-yard line until they were forced to punt. The Verona offense looked to be successful until the drive was derailed by penalties.

To start the fourth quarter, Patel punted the ball 40 yards to the Hanover Park 20-yard line. Hanover Park was dragged down by tackles, and it seemed like the next play, they would punt. Instead, a hole opened up, allowing the Hanover Park quarterback to rush for 35 yards. The Verona defensive line consistently tackled the running backs on the field, and slowly the offense was moved back. Finally, a pass was launched into the endzone. Just when it seemed like a catch, Garmont pulled away with an interception. When Verona took the field, they were unable to move the ball and punted. Hanover Park slowly and steadily moved the ball through inside runs until they scored, making the score 21-7. Verona’s offense was unable to respond, and Hanover Park kneeled the ball and ran out the clock.

Verona’s next game will be Thursday on Sellitto Field against Belvidere High School. This is part of a regional tournament for the schools that did not make the playoffs. The contest is a lose-and-be-out style, with three rounds to determine the grand champion. The football team will focus on this challenge to wrap up 2022-2023 football.

“We’re going to go back to practice and work like we always do,” said Connor Demasi, quarterback. “We have the mindset of, whatever happens, we move forward and go back to work and prepare for the next game.” 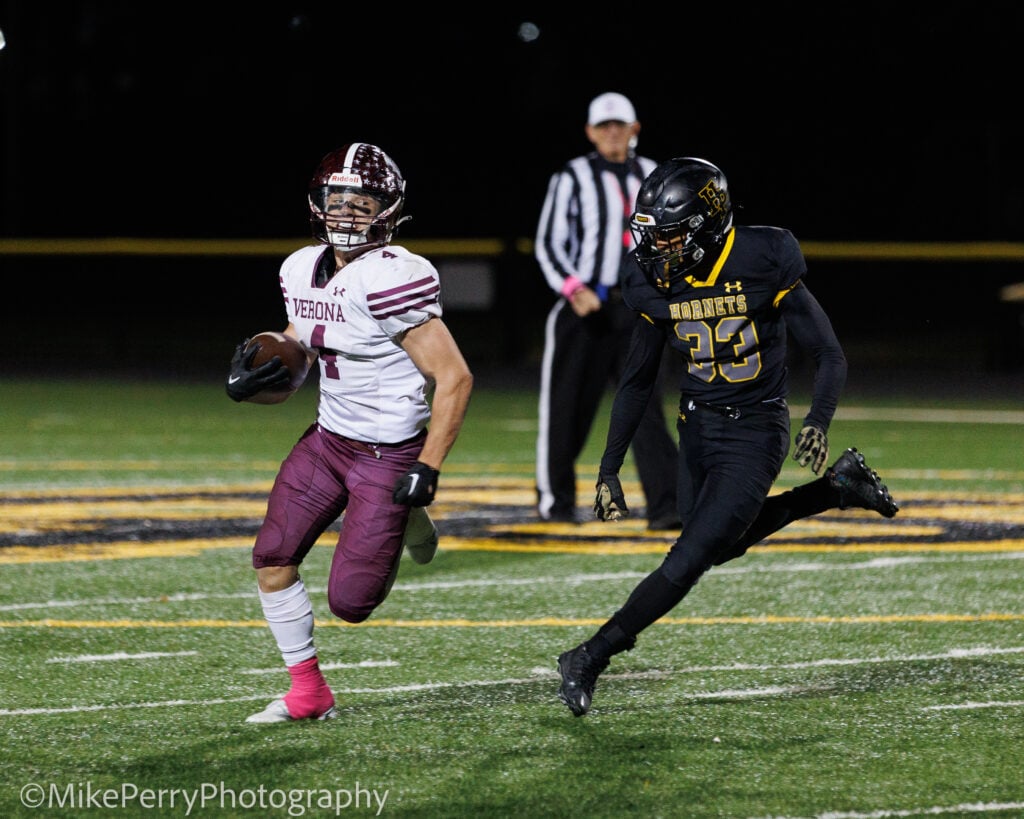