Verona has always had a strong marching band with numerous championships, trophies, and memories. This year is certainly no exception, as the band has proven in its first two competitions. After a summer of hard work and long days of playing and marching, the band finally came together and performed the show to a panel of judges.

This year’s show includes four parts with over 50 sets of marching and a wide variety of music. Part one is a recreation of the song “Chandelier” by the pop artist Sia. To exemplify this, a chandelier prop is visible on the field. However, part two contrasts with exhibits from the music of Verdi and is about a masquerade ball, the show’s main theme. Part three includes features from Shostakovich’s “Waltz No. 2” and Mozart’s “Lacrimosa.” Finally, part four is a mix of all three parts and ends with a three-note coda.

On Saturday, September 24, the band traveled to Roxbury for its first New Jersey Marching Band Directors Association (NJMBDA) competition. This organization’s founder and the former president is none other than Verona’s own Erik Lynch, the co-director of the Marching Maroon and White. The other co-director is Zachary Wroblewski, who joined the band only last year. He and Lynch have been instrumental in organizing rehearsals and teaching musicianship. The color guard also has had a knowledgeable staff assist them in the instruction of the show. These include Brenda Lizarraga, Brittany Woods, and Rebecca Karpinski. 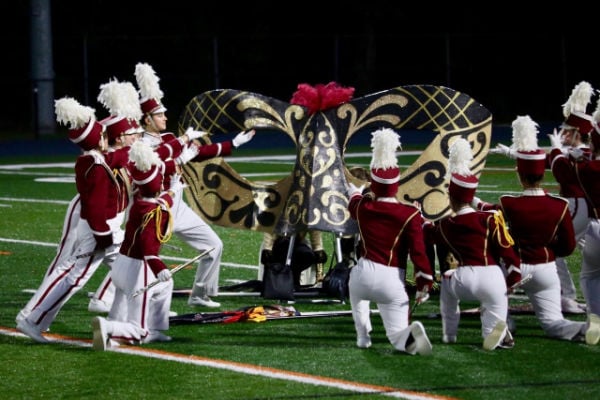 Verona scored third out of five triple-A bands in the first competition. Triple-A bands generally include bands with 75 to 100 members, which is where Verona falls. Mount Olive came in 5th place with a score of 78.4; Randolph was in 4th place with 78.9 points; Verona received 82.5 points and 3rd place; Pequannock High School finished in 2nd place with 83.9, and in 1st place West Orange with 84.2 points.

The Randolph competition was again a success, as determined by the crowd’s reaction and the score. Although freezing rain covered the show, Verona still achieved second place. In the AAA competition, four bands competed. In fourth place was Elizabeth, with 77.5 points; in third place was Ridgewood, with 78.2 points; in second was Verona, with 80.3 points; and West Orange came first, with 83.8 points. 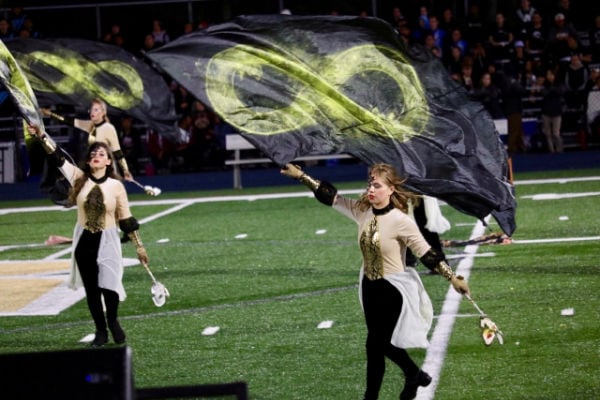 The West Orange competition saw Verona achieve even greater heights. There were 3 AAA and 2 AAAA bands competing directly against Verona. In 5th place came Livingston, with 75.2 points. In 4th place came Mount Olive, with 77.1 points; in 3rd, Scotch Plains Fanwood High School, with 82.2 points; in 2nd with 83.5 points, Elizabeth High School, and in first place, with 83.7 points, Verona High School. Not only this, but Verona beat out all the single A and double A bands as well. These towns were Dover, Glen Ridge, Piscataway, Morris Hills, Parsippany, Barnegat, Wayne Valley, and Roxbury (from lowest to highest score.) This meant that Verona received the Grand Champion award presented by West Orange Mayor Robert D. Parisi. Not bad for a town of 14,500.

But the band is not resting on its laurels–or drum sticks. “I think we need to work really hard and put all of our heart into the next show,” said Drum Major Dionisia Yanniotis.

The Verona Band has a very bright future ahead as it heads into its next competition. This Saturday, October 15, Verona will host the Festival of Bands at Verona High School as its home show. The show will start at 4:55 p.m. with Verona playing the national anthem; then bands will play until awards at 8:30 p.m. The participating bands include Pascack Hills, Tenafly, Roxbury, Chatham, Morris Knolls, Wayne Valley, Glen Ridge, Parsippany Hills, Phillipsburg, West Orange, and Verona. The cost of admission is $12 for adults, $8 for students and seniors, and free for children under 4. Attendees can also buy “Airgram” messages that will be read over the announcement system, or “Candygrams” for the participants.

On October 22, the band will travel to Wayne Valley High School. Finally, on October 30, it will compete at The College of New Jersey (TCNJ) in the state championships. 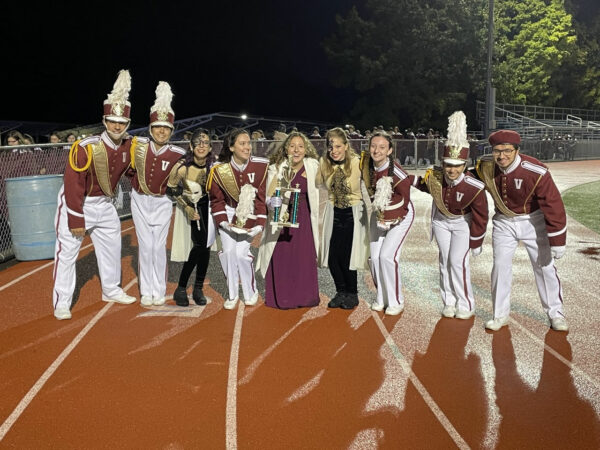