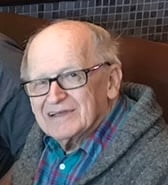 Visiting will be held in the Prout Funeral Home, 370 Bloomfield Avenue, Verona on Sunday, October 9, from 2 to 5 p.m. A graveside service and interment will take place on Tuesday, October 11 at 10 a.m. in Gate of Heaven Cemetery, East Hanover.

Born and raised in Newark, he lived in Irvington before moving to Verona in 1968 and then to Bloomfield in 2021. He graduated from St. Benedict’s Prep in 1953 and earned a bachelor’s degree in science from Montclair State University.

Bill proudly served his country in the U.S. Army in the Signal Corps from 1954 to 1956, attaining the rank of corporal.

Professionally, he was a dedicated teacher for 28 years, working for the East Orange Board of Education at the Vernon L. Davey Junior High School, retiring in 1990.

Bill enjoyed being an amateur photographer and as a member of the Plainfield Camera Club was happy to assist others in becoming more adept with the camera. He served as scoutmaster with BSA Troop 2-Verona for many years and was an active member of the Cranford Alliance Church, where he served as elder deacon.

He will be remembered for his love of his family and friends, his infectious smile and twinkle in his eye, enthusiasm for sharing his picture-taking skills and his strong sense of community service.

He is survived by his son, William M. Smith and his wife, Lynn, daughter, Patricia A. Carnes and her husband, Todd, and grandchildren Steven Smith and Melissa Smith. Surviving are also many nieces and nephews.

In lieu of flowers, donations to the Cranford Alliance Church, 7 Cherry Street, Cranford, NJ 07016 would be appreciated.