UPDATE: This story has been updated to reflect Councilman Tamburro’s clarification that he did in fact sign the proclamation and that his “opposition was in reference to opening the lighting of the municipal building to any and all interest groups, not to the proclamation.”

Early in Monday night’s Town Council meeting, Mayor Alex Roman read into the record a proclamation declaring June 3 to be Gun Violence Awareness Day in Verona. It was a proclamation that has been made by previous Verona Councils for the past six or seven years. The Council then heard from Peg Zitko, the Essex County lead for Moms Demand Action, a national group working on public safety measures to prevent gun violence. She asked that light its municipal building in orange over the weekend of June 3 to June 5.

Councilman Christopher Tamburro was late to Monday’s meeting, which was held online, and was not present for the proclamation reading or the request. But about two hours later, when Deputy Mayor Christine McGrath returned to the question of lighting Town Hall orange and Mayor Roman asked for the Council’s consensus on that, Tamburro objected.

“There are a lot of residents in town who find the proclamation and inclusion of this to be very ideological in nature,” Tamburro said, “and I do not think that we should be lighting up our township facility for something ideological. I understand it’s veiled as gun safety, and that’s what that proclamation said and so on. But the same organizations that support this are also very much trying to limit gun rights and so on. And I think a good portion, based on the number of gun permits that we have out in Verona, of residents do not support that and doing anything public like that will alienate a portion of our municipality. So I’m opposed to lighting the building orange for that purpose.” Proclamations, which used to carry only the mayor’s signature, are now prepared with the signature of all Council members.

McGrath said that she was “deeply disappointed” by Tamburro’s position. “Responsible gun owners, which are the majority of gun owners in this country, are very supportive of gun violence prevention efforts,” she said.

“Gun violence has become the number one killer of children,” McGrath continued. “And as we heard in the proclamation, two-thirds of those deaths are suicides and that can happen in any community, including ours. And every day I just pray that something won’t happen here.” A Verona gas station attendant, Daniel Pritchard, was shot to death in a robbery in February 2009; Essex County prosecutors have been unable to get a conviction in the case.

Tamburro persisted in his objection. “I think we’ve come to the point that in so much of what we’re doing as far as proclamations and and things like that, that we’re starting to focus on things that are much outside of Verona,” he said. “I think we need to in general as discussed after having six proclamations last time around, start to focus our staff time and our council meeting time on issues that are clearly facing our town. So while I appreciate Councilwoman McGrath’s points, I think we need to start using the lights in our town to bring the town together.” 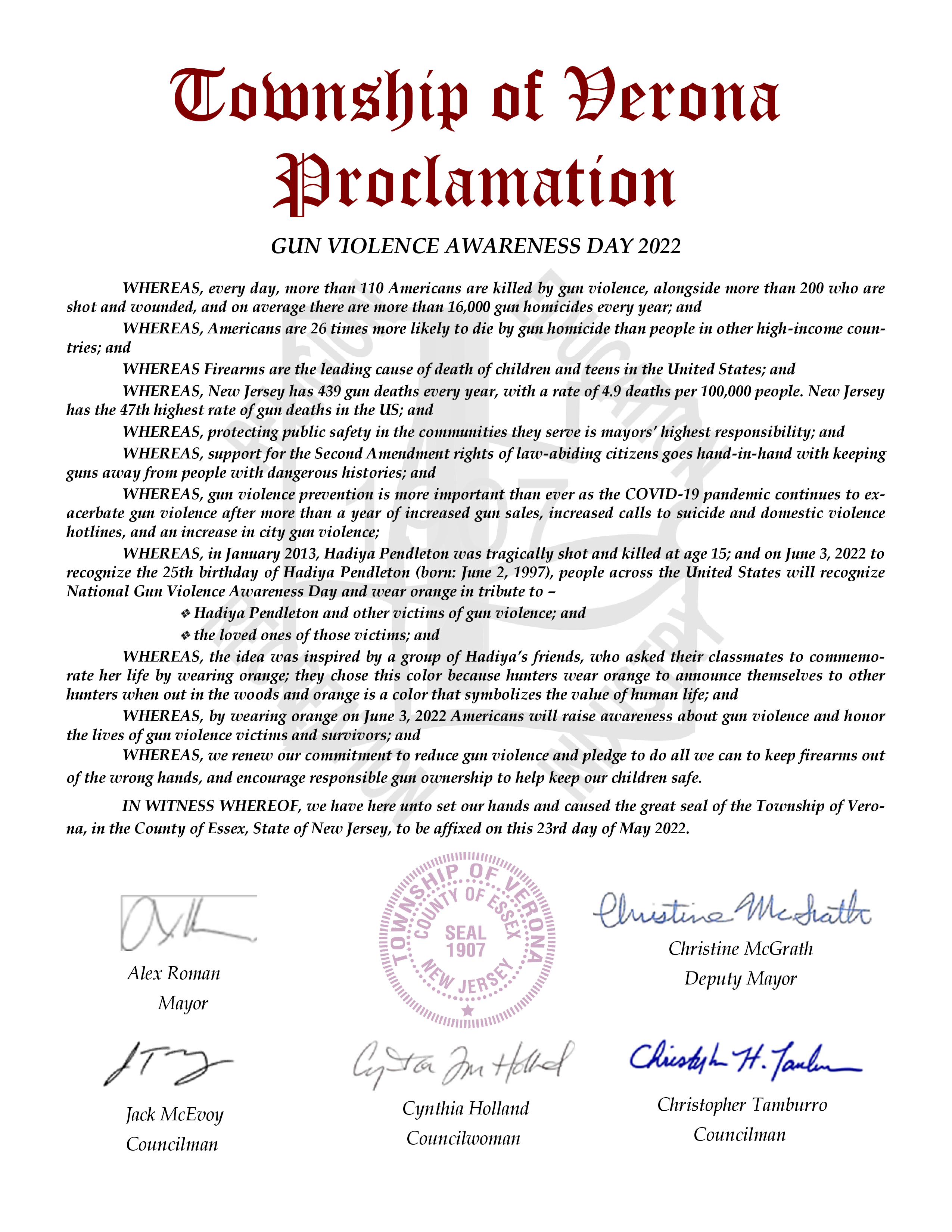 You can watch the Town Council meeting in full in the video below.