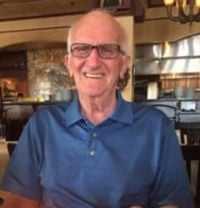 Born in East Orange NJ he lived in Verona for 58 years before moving to New Port Richey, Florida in 2015.

He served in the Merchant Marines and was an Air Force Veteran of World War II. Mr. Maglione was a claims supervisor with USF&G Insurance Co. for 25 years before retiring in 1989.

He was predeceased by his wife of 59 years, Agnes (nee Spina). He is survived by his daughter Diane Gorski and her husband Edward of Verona, his son Joseph C. Maglione and his wife Katrina of New Port Richey and grandson Edward J. Gorski. Joseph is also survived by sister-in-laws and brother-in-law Phyllis Fleno of Rocky Hill, Connecticut, and Barbara and Charles Spina of Verona.

In lieu of flowers, donations to the Verona Rescue Squad, 12 Church Street, Verona NJ 07044 would be appreciated.

Condolences may be left on his obit page at www.ProutFuneralHome.com.