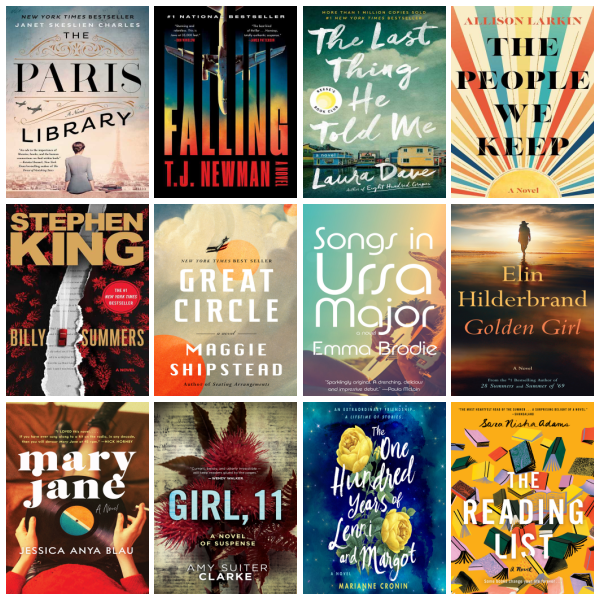 Since 2017 when I was sitting in a hospital waiting for my father to get out of surgery, I have written about the best books I’ve read during the year. That original post was at the request of MyVeronaNJ’s editor, Virginia Citrano, who probably didn’t realize at the time that she created a monster! The books don’t necessarily have to be published in the year…in fact they are often books that I’ve missed over the years.

I’ve been keeping the list to 10, but last year expanded to 20 (for 2020). I’ve decided this year to list my favorite 13 books because 13 has been a lucky number for me, where 10 has not. I could have done more (and actually I did by adding some “runners up” at the end). Whittling down this list was harder than I thought, but here’s what I managed to come up with. They are in order of which I read them starting with the most recent and working my way back to earlier in the year, and each book is linked to its entry in the Verona Public Library‘s catalog. (The library has large print, ebook and audiobook versions of many titles.)

You will note that there is no non-fiction this year; it’s not that I don’t read non-fiction, it’s just that I generally read more fiction and the non-fiction that I did read this year just didn’t move me as some of the below listed novels did. So here we go:

“Billy Summers” by Stephen King: Can a hitman be a good guy? In the hands of Stephen King he sure can be. King makes what could be the “bad” guy a real person. He doesn’t color things in black or white, but knows that ALL people are shades of gray.

“The People We Keep” by Allison Larkin: How does a teen end up living alone in a motor home alone? This a beautiful and often heartbreaking story. It was so descriptive that I could feel the cold, I could see the woods, the lake, the bathrooms…This is fiction, yet April’s story rings true and I am (sadly) sure that there are plenty of Aprils out there in the world. I hope that I am kind to each and every one of them because we all need more human kindness.

“The One Hundred Years of Lenni and Margot” by Marianne Cronin: Lenni is a teen with a terminal illness living in a hospital. Margo is in her eighties and in the same hospital. They met in an art class and the results are beautiful. This was not what I expected; a very unique story that shows that friendship can come in unusual places.

“Golden Girl” by Elin Hilderbrand: I am a fan of Elin Hilderbrand and her books have often made my “best of” list. I have to say this is the best novel I have read of hers (thus far; there’s always next year). It could have been trite or inane, with the main character being dead and looking in on her family, but it isn’t. It is well rounded and thought provoking. Even though I have never been to Nantucket, I could really feel the island in this book. Read this and you will come to appreciate family and friends and the time that we are all blessed with on the earth.

“Songs in Ursa Major” by Emma Brody: Are you a fan of the music of the 60s and 70s? Did you love “Grace of My Heart” and/or “Almost Famous”? Then this is your book. This novel encompasses many of the same themes and puts you in the era in which it was set. You will feel like you are there. And don’t be surprised if you start listening to music from the era as you read.

“The Reading List” by Sara Nisha Adams: Reading CAN bring us together. Reading CAN change our lives. This novel shows just how that can happen. While this started off slow for me, I quickly came to love and feel for the characters. Funnily enough I have read almost all the books on the reading list of the title and now I am compelled to read not only those, but the list that the author presents at the end as ones that she could have put on the list. She obviously is not just a gifted writer, but also knows a good book when she reads one.

“The Last Thing He Told Me” by Laura Dave: A husband disappears and the only clue he leaves is “protect her” (referring to his daughter). What follows was well written and completely enveloping. I was so caught up that my husband had to come and get me and tell me that there was someone at the door for me. I was just too involved with all the twists and turns. Don’t be surprised if you get caught up too.

“Girl, 11” by Amy Suiter Clarke: Can a crime podcaster find the answer to who the countdown killer is? Why did he suddenly stop killing? This is an incredible debut novel and I hope that Amy Suiter Clarke writes many more thrillers because I KNOW I will want to read them. (And no, I didn’t guess the one twist in the story…which says a lot!)

“Falling” by T.J. Newman: Another thriller from another first time author! T.J. Newman hits a home run with this one. Although after reading I will definitely be more nervous flying (not that I fly a lot). Lots of twists will make you not want to put this down. I hope this is the first of many novels for this author. (I’m sure her experience as a flight attendant will provide MANY ideas for future tales.)

“Great Circle” by Maggie Shipstead: An epic saga and worth every page. (Even those about Hadley, the character in “current” time who will be portraying our protagonist in a movie.) Gripping story full of rich detail that will make you think Marian Graves is a real person. The author does an amazing job with historical detail and is never boring. Every character is true to life. I soaked up every word.

“Mary Jane” by Jessica Anya Blau: You can tell I was a child of the 70s because this one brought me back. Maybe because I was around Mary Jane’s age during the time that this novel was set. Brought back lots memories and feelings for me. I could feel the 1970s pouring out of this book; I could hear it. Another one where if you are a fan of “Almost Famous” you will love this.

“The Paris Library” by Janet Skeslien Charles: Loosely based on the true story of librarians in Paris during WWII. A historical novel that is real and relevant to NOW. The details make you feel like you are in Paris, in the library. The characters were rich and honest. No one was “perfect” and each one’s flaws made you love them even more.

“In Five Years” by Rebecca Serle: A great “what if” type of story that makes this more than just chick lit. This was a very sweet story and one that I read quickly because it was so sweet even though it touched upon the magical, it still seemed very real. The friendship/love between Bella and Dannie is one that is true; even if fictional.

Now for the honorable mention section because I there were just so many books that I read this year (over a hundred and the year isn’t quite over yet.) One of the BEST that I wanted to include was another Stephen King, “Later“. I felt it was one of his BEST works, but it was a quite short (at least for Stephen King), so I left it off. But if you’re looking for some intense Stephen King, definitely seek out this one. You’re in for a wild ride!

Others books that could have made the cut, but didn’t include: “The Children’s Blizzard” by Melanie Benjamin (which proves that simple decisions can have a BIG impact), “The Holdout” by Graham Moore (an interesting take on our judicial system), “That Summer” by Jennifer Weiner (a well thought out novel disguised as chick lit. Read it and think), “Reunion Beach: Stories Inspired by Dorothea Benton Frank” (a tribute to the late author by her friends; some of the stories are amazing; some not so much), “The Santa Suit” by Mary Kay Andrews (for a little holiday cheer), “Where the Crawdads Sing” by Delia Owens (I feel like everyone had read this but me…now I can say I have; reminded me very much of the novel and film “Where the Lillies Bloom”) and “Fifty-Fifty” by Steve Cavanaugh (the latest in the Eddie Flynn series…which sister is guilty…nothing is obvious or what it seems.)

That gives you 21 novels to ponder for the New Year. Happy reading in 2022!

Beth Shorten is a life-long resident of Verona. For more than seven years, she has been chronicling life here on her personal site, Bfth’s Boring Blog. You can find her previous Best Books choices here.