Football Ends With A Win

There were enough turnovers to fill a small pastry shop, but in the end, Verona football defeated Shabazz 26-15 on the Bulldog’s home field and closed its season with a win.

Midway through the first quarter Cael Zebrowski connected with Joey Petro to put Verona on the scoreboard first and, three minutes later, it was Derek Bernardino’s turn to take one into the end zone. Shabazz scored, only to have the TD erased by a penalty. The Bulldogs threatened again and were stopped by a Daniel Vecchio interception, but later recovered the ball and made it to the end zone. As the first half drew to a close, Verona got into the red zone again but with only seconds left on the clock it fell to Kieran Patel to add the first of his afternoon’s two field goals to Verona’s score. 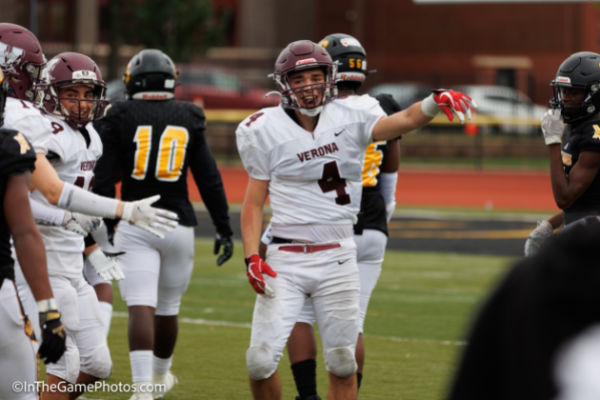 Verona continued to gnaw away at the Bulldogs in the second half, as Alex Rodriguez snagged another momentum-busting interception. And then Brodie Neale sealed the deal, tackling a Shabazz fumble and turning it into a Verona touchdown. Verona ended the season with a 4-4 record.

Before the game got underway, Vecchio was honored with the Super Football Conference’s Young Man of the Year Award. It was created to honor Nutley football coach Steve DiGregorio, who passed away from cancer earlier this fall.