The New Beat Of Marching Band 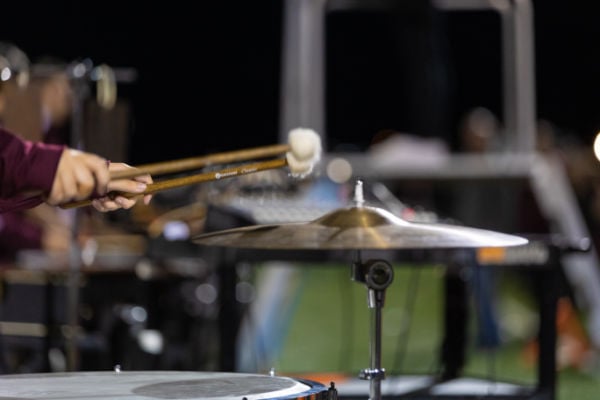 “It started as a conversation in 2016, between me and Lewis Kelly, the band director at West Orange High School,” says Erik Lynch, director of bands at VHS. “We wanted to change the way we approached the marching band show, because it wasn’t about education, about musicality and artistry. It was about competition, and in order to go to as many competitions as possible, you’d need to pay large fees. For smaller programs, that money might not have been there — and worst of all, the smaller programs wouldn’t get access to the same judges as a larger, more established program.”

The lack of equity in the band world disturbed Lynch, and he set out to create something new. “With the new organization, we wanted to give every band access to the same, high quality judges, people who have doctorates in music, and who could give meaningful feedback,” he says “And in doing so, we wanted to increase the emphasis placed on artistry, on the musicality and symphonic quality in marching band, and hope that the kids could take away something more meaningful from the band literature.”

In practice, this meant that it wouldn’t only be pop and rock tunes on the field, “We’re doing Mahler this year,” says Lynch, referring to the 19th century composer Gustav Mahler, “and we’re looking into his background, his life and his work, what makes his music meaningful.” Verona audiences are no stranger to classical music in marching band; the year prior to the formation of the New Jersey Marching Band Directors Association (NJMBDA) , Verona’s show, “A Night at the Opera,” featured the music of Richard Wagner. With the NJMBDA, though, Lynch hopes to expand Verona’s approach to marching band, in which Mahler exists beside “Mad World” in Verona’s 2021 show, Atlas — and “in 10, 20 years, the kids look back and realize they really learned something meaningful.”

Fundraising was the biggest challenge to get the new organization off the ground, says Lynch, as individual music departments don’t have much spare capital. “When it comes to budgets, music and the arts are always the first things to get cut. Our budgets aren’t big. What was important for us was to find financial backing, because it is entirely a volunteer organization. But since we’re a volunteer organization, no one’s looking to make extra off of this: our fees are lower, and that means a school that might have paid an extra $3000 on fees can now afford a new bari sax.”

Once the word about the new marching band league spread, interest skyrocketed. “When we launched the first version of the website, we had 20 bands trying to sign up that day.” And, while the NJMBDA began in North Jersey, “we had band directors in Central and South Jersey reaching out, saying they were interested. So, we all got together, and now Chris Vitale, from Westfield High School, is co-president, and we have member bands from across the state.”

The change in size has also brought about a change of venue for the NJMBDA Festival of Bands. “For the past three years or so, championships were in Verona,” says Lynch. “This year, though, we’re at The College of New Jersey for championships, which we’ve been working toward since the start.” Verona’s own Festival of Bands also returned to its pre-pandemic size: Fourteen bands participated in this year’s festival on October 23. As the host band Verona did not compete, but it did show off its show, which you can watch below.

“Marching band is a part of music education, and it shouldn’t be treated any differently,” Lynch says. For Lynch and the members of the NJMBDA, it’s about “changing the educational paradigm around marching band” — and Verona has been at the center of the charge.

The NJMBDA championship will be held at TCNJ on Sunday, October 31. The Marching Maroon and White compete at 6:30 p.m. and awards are scheduled for 9 p.m. Tickets are $25 for adults and $15 for seniors and students, and they can be purchased here.