It’s The Middle Of October 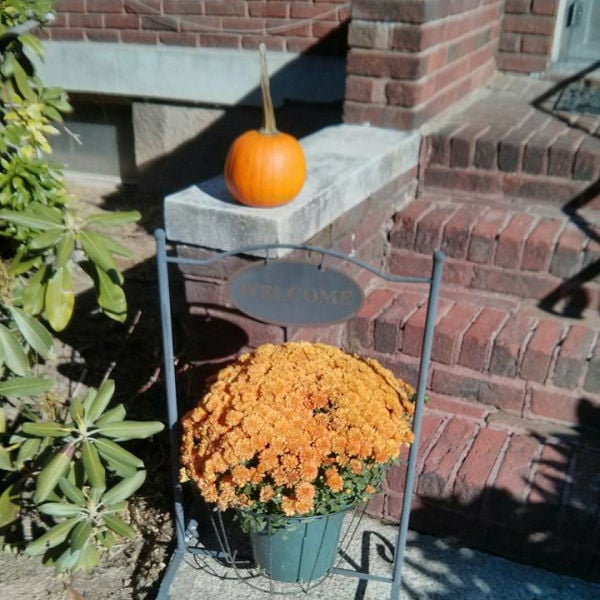 This is the first time in my memory (and I’ll admit that my memory isn’t all that great) that we’ve made it to October 15th without turning the heat on. As a matter of fact the windows are wide open and I’m wearing a sleeveless top. It is the middle of October, isn’t it?

I’m not complaining. I like the warmer weather. I’ve often said that early autumn is my favorite time of year as the days are (supposedly) warm and the nights are cool. I tend to think of early autumn as any time after Labor Day to…well I guess mid-October would be about right, so why am I talking about this?

As far as I can recall, there have always been some pretty chilly days towards the end of September. (Which is why I got married before the middle of the month. I figured it wouldn’t be too hot and it wouldn’t be too cold. I was right…of course I should have also realized that it might not be sunny, but that’s another story.) When my husband (who was then my finance) moved in with me at the end of September 1995, I can remember being alone the night before with the heat on, drinking a glass of wine and watching “Twin Peaks: Fire Walk With Me.” (Why I remember this I don’t know!)

I can also remember my first year in college being cold in my dorm room because they didn’t turn the heat on until October 15th (or maybe it was the 16th or 18th…it was definitely mid-October or later). I always thought it was stupid to have a set date to turn on the heat. Heat should be turned on when you are COLD, not based on a number on the calendar. The same can be said for air conditioning.

Which brings me to the first concert I attended when my son was in middle school. There were four bands and two choirs, so there were a lot of kids and even more families in the audience. The event was held at the high school (the auditorium was larger) in mid-December. Despite it being December in New Jersey it was really warm out, but because it was December the heat was on in the auditorium. It was hell! (And I’m not talking about the music.) I could not wait to get out of there and I think I was dripping with sweat. (Yuck.)

So my point being (do I have a point), that we have reached the middle of the month of October and I haven’t turned the heat on yet because we haven’t needed it. (Although I will admit that I was tempted once or twice, but the thermostat did not dip down low enough to push me over the edge.) This is unusual. And while I prefer warmer weather over cold, and I certainly do not want a repeat of 2011 when we had heavy, wet snow before Halloween (and which effectively pushed back Halloween festivities until early November), I do have some concerns.

While I love the warm weather in October, living in New Jersey should not mean nearly 80 degree days. Putting on suntan lotion as I sit on my patio at lunchtime and having to go inside because it’s too darned hot is not optimal for the environment. As the pendulum swings one way, so must it go back the other. What will this mean for our winter? I don’t want to think about this, but I must. I hear it is to be colder and wetter (which means lots of snow and/or ice). That is something I DON’T want to deal with, but do I have a choice? Yes, they could be wrong, but…

If anything screams climate change to me it is hot October days and the potential (highly likely, I so hope I am wrong) for brutal cold and wet winters (that will last way too long…but then any winter past January 20th is too long for me). That and the fact that my teen son truly feels that he will see the end of the planet in his lifetime. (Which is something I never thought my son would think!) Scary stuff. And I hope to hell he’s wrong, but it motivates me (and maybe you) to try just a little bit harder to help preserve this big blue marble that we live on. (You’ll have to be a certain age to get that reference.) While we can’t change the past, we can work to make a better future.