Back To School: A Week In 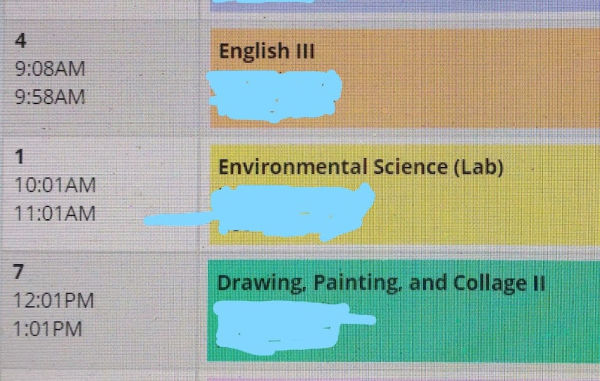 Today was the first day I drove my son to school at the “regular” time. What do I mean by that? Well, not surprisingly it’s complicated.

School started last Thursday. However, the first day at high school isn’t a “regular” day. Only freshmen come in at 8 a.m. and they get a two-hour “orientation.” Makes sense to me and I thought it was very helpful when my son was a freshman two years ago. (This was pre-pandemic; a time I can barely remember.) All other students go in at 10 a.m. and that’s officially when school starts. Which means they have abbreviated classes (with the exception of lunch) and they have all eight classes. Except that my son has nine classes, but I’ll get to that in a minute (or two).

Though there are eight classes/subjects, students only have 6 a day (and lunch). The schedule rotates daily with A day being period 1-3, lunch and periods 5-7. Kind of makes sense. Day D goes periods 2-4, lunch and periods 6-8. Again, kind of makes sense. It’s the B and C days that seem totally out of whack. (At least to me; maybe there is someone out there who gets it). If we are in B day the schedule is 4, 1, 2, lunch and then 8, 5, 6. Day C is 3, 4, 1, lunch and then 7, 8, 5. Is this a class schedule or a phone number? (Yes, I know there are not enough numbers for it to be an actual phone number, but go with me on this, ok?) It’s hard enough figuring out what day it is let alone what order and what classes there will be. At least that’s from my perspective…I’ll admit that I’m an old lady. (However, my son did take a photo of the schedule so that he can figure out where he is going on what day.)

But what about his 9th class? Well, that would be Chamber choir and they met for the first time on the second day of school, Friday. (No, they do not sing chamber music…I don’t know why they are called that.) Chamber choir is period 0, so it is BEFORE the school day actually starts. It is also an auditioned group, but my son never auditioned because last year “regular” choir would not fit into my son’s schedule. It conflicted with French class, which he had to take. I wrote to the music teachers (at that point there was one who was on maternity leave and due to come back, but didn’t and there was one who was filling in) and asked if he could be placed in chamber choir so that he could participate in music. They must have agreed, because that’s where he ended up last year. (And I have no idea IF they had any kind of audition to get in because how would you do that when no one was actually physically in the school at that time.) At the end of the last school year, his choir teacher (not the one on maternity leave who decided not to come back or the one who filled in for her who decided that the job wasn’t working for her, but another new teacher who was just about to graduate from college) placed him in chamber choir for this year. Although there were auditions last spring for the chamber choir, I’m guessing she kept the students who were already in the class in. (And I don’t think she knew he hadn’t auditioned.) Last year (as in previous years) chamber choir met Monday, Wednesday and Friday for 30 minutes during lunch and Tuesday and Thursdays at 7:15 in the morning. This wasn’t so bad as until the very end of the school year Tuesday and Thursday classes were always remote (and lunch classes were held outside). 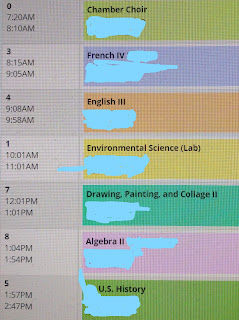 However, that was LAST year. This year there is a new choir teacher (for those keeping score, my son is going into this third year in high school choir and is on his fourth teacher) and the schedule has changed yet again. Chamber choir now meets Monday, Tuesday, Thursday and Friday at 7:20 in the school auditorium. Which means I have to get him out of the house by 7:10. If you think this is an easy or fun task, you would be wrong. It’s not easy for anyone; especially when we were never told that choir was going to meet four mornings a week, until it showed up in a school email that we received a week or so before the first day of school. I assumed (and you know what that means), that period 0 would have been the way it always was. To make is even more confusing, the parent portal schedule has it down as EVERY day at 7:20. (I’d also like to note that when it comes to chamber choir, the parent portal calendar has ALWAYS been wrong, but…)

Last Friday at 7:20, my son and his 15 other classmates, met their new teacher for the first time. They ran through “America, The Beautiful,” which she had posted on classroom the week before so they could familiarize themselves with it and then on Saturday morning (yes, you read that right), about half of them (my son included) sang it at our town’s civic center for the annual 9/11 Memorial service. Does it get crazier than that?

Back to this morning…the first day I drove my son to school at “regular” time. The good thing about taking him early is that I can leave our house, pick up a friend who is also in the choir and drop them off at the front of the school in under ten minutes. (We live about 2 miles from the high school). This morning we left the house before eight to get him there before 8:15. We made it with two minutes to spare! Yes, traffic in my little town was that crazy!

It didn’t help that a portion of the road I usually take is still closed down. When Ida hit us a few weeks back, part of the road buckled and it’s been cordoned off since then. Which means I have to take the “main drag” which has plenty of traffic lights as well as also being a drop off point for the middle school. When I got to the high school, there were so many cars trying to drop off in the semi-circle in front of the building that it spilled out into the road. I dropped off my son and he was probably had already gone to his locker and gotten to his first class before I was able to get out. (And I was making the “easy” right hand turn as opposed to the crazy left.) As if that wasn’t crazy enough, while I was making my way down another street, traffic was backed up a bit as cars had to turn either left (which is what I was going to do) or right. A SUV drove down the wrong side of the street to make a left and getting ahead of the car that was already at the corner (on the correct side of the street) who was also trying to make a left. I think my jaw is still on the floor from that one.

So despite is being a pain in the you know what to get my son out the door on early choir mornings, I think I prefer it to “regular” days. I also think there may be a return to morning walks to school for my son on Wednesdays. (Hey, he USED to do it.) Of course things may change; after all we’re only a week in.