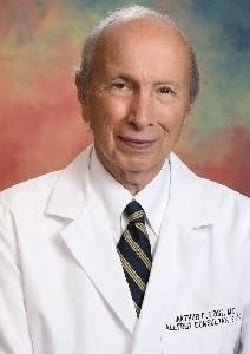 Born Nov. 3, 1936, in Newark to Dr. William and Rebecca Fost, Art was raised in Belleville. A graduate of Lafayette College, Art earned an M.D. from Thomas Jefferson University in Philadelphia, interned at Beth Israel Hospital in Newark and completed his medical residency at Children’s Hospital of Philadelphia.

Before starting a nearly 55-year career as an allergist, Art served as chief resident of pediatrics at the Hospital of the University of Pennsylvania and trained in allergy at St. Vincent’s Hospital in New York. Even as he was launching his private practice, Art established the first allergy training fellowship program at the University of Medicine and Dentistry of New Jersey, in Newark. His private practice, Allergy Consultants PA, was located in Belleville. He later added an office in Verona, and a third office in Sparta.

Over his long career, Art cared for a large practice comprised of multiple generations of loyal patients. He remained active in teaching and research throughout his career. He was cited in New York magazine’s “Best Doctors in the New York City Area” and was recognized annually as a “Top Doc” by his peers in NJ Monthly. Art was a past president of the New Jersey Allergy Society. In the early days of his medical practice, he worked alongside his father. He was joined at Allergy Consultants in 1998 by his son David, who continues to manage the practice.

Art volunteered globally delivering health care and teaching medicine in countries including Ethiopia, Rwanda, Zaire, Tanzania, Israel, Guatemala, and El Salvador. In Ethiopia, he helped malnourished children, while also working on behalf of the American Jewish Joint Distribution Committee and the State of Israel as part of Operation Solomon, the first airlift of Ethiopian Jews to Israel.

In his travels, he inspired and was inspired by physician Rick Hodes, treating patients in Ethiopia and Rwanda following the genocide in 1994. While in Rwanda, Art helped rescue Taka, a young boy with machete wounds to the head, and helped facilitate his transport to the U.S. for multiple surgeries and eventual adoption. Taka remained close to Art’s heart.

Active in the Jewish community of New Jersey, Art served twice as president of his congregation – Temple Sholom of West Essex. He also was active in Jewish Federation of Greater MetroWest NJ.

An avid early-bird tennis player, Art also was an accomplished hiker and world traveler. He savored journeys “off the beaten path,” including a dog sledding trip in the Northwest Territories, backwoods camping adventures in Maine, and on horseback in the mountains of Montana with his son David.

Art married his childhood sweetheart, Ruth Eisemann Fost, 62 years ago, and he continued to make toasts “to the woman of my dreams.” Art was the greatest fan of Pushcart Players, a professional touring theater for young audiences co-founded by Ruth in 1974. He accompanied the theater troupe on tours of the U.S.S.R., the Czech Republic (including the Terezin concentration camp) and public schools throughout the United States.

Arrangements were by J.L. Apter Memorial Chapels of Cedar Grove. An outdoor memorial service to celebrate Arthur Fost’s life will be announced for a future date.

In lieu of flowers, donations can be made to Dr. Rick Hodes Medical Program at rickhodes.org and Temple Sholom of West Essex at sholom.net/donate.