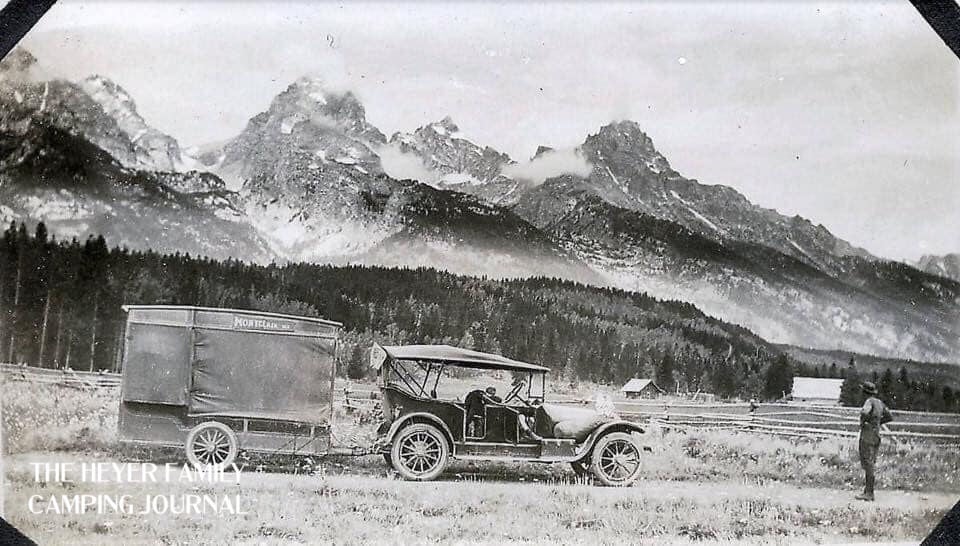 “Left Snake River at 12 o’clock. Had a swim in the icy waters of the river. It was quite a climb over the Continental Divide to our first stopping place – West Thumb – bought supplies but was unable to get gasoline or oil here, and pretty short. Expect trouble in going to Lake Junction, 19 miles over a big mountain. Wasn’t disappointed; after visiting the many hot and boiling springs around West Thumb, on the first hill the oiler stopped because the oil level was too low. Well, we couldn’t stay there blocking the road, so I drew a quart of gasoline, mixed some graphite with it and dumped it in the engine. Still the oiler wouldn’t work, so I dumped in two quarts of water to raise the oil level – which it did. By careful driving, reached Lake Junction OK with one cupful of gasoline to spare – close call. This is some wilderness. No wonder the bears are so thick.”

The writer is Charles Heyer’s grandfather Arthur, and the diary entry is dated August 1, 1921. Arthur Heyer was en route from Montclair to California with most of his family (including Charles Heyer’s father) in a large, open-sided car pulling a home-built camping trailer. There wasn’t much in the way of paved roads or roadside amenities back then, but there was plenty of adventure and awe at a vast country, and it was captured in a diary that Charles Heyer has just published as a book,  “The Heyer Family Camping Journal.”

“I’m 76, so I figured maybe I should get this together,” says Heyer, a Verona native and long-time parishioner at the First Presbyterian Church of Verona who now lives in Cedar Grove.

Heyer’s father was one of four Heyer boys who made the trip and turned 16 during the journey, which the family had meticulously planned for months, pouring over maps and making notes about campgrounds. There were no coast-to-coast hotel chains to book through a cell phone app, and while parts of the Lincoln Highway existed, sometimes the roads were so bad that the Heyers simply drove on the prairie. And when the brakes overheated on a mountain road, the car — a 1915 Hudson 6-40 –was driven into a stream to to cool down. When something broke on the car or the trailer, Arthur Heyer devised a makeshift repair until he could get to a place where he could weld things together properly.

Charles Heyer says that his grandfather was better equipped than many to do this sort of thing. “He had hand-built a car in 1901, and he had opened an auto repair and parts business after the turn of the century,” Heyer says. “He was an inventor and an adventurer.” His grandfather had tried out another transportation invention, the airplane, and painted a compass atop one of Montclair’s trolley barns so that pre-instrumentation aviators could better find their way.

Arthur Heyer’s inventiveness was passed down in the family genes. After graduating Verona High School with the class of  1963, Charles Heyer had a long career as a model maker for Matchbox, Buddy L and Fisher-Price. “I have the Heyer mechanical sensibility,” Charles says simply. 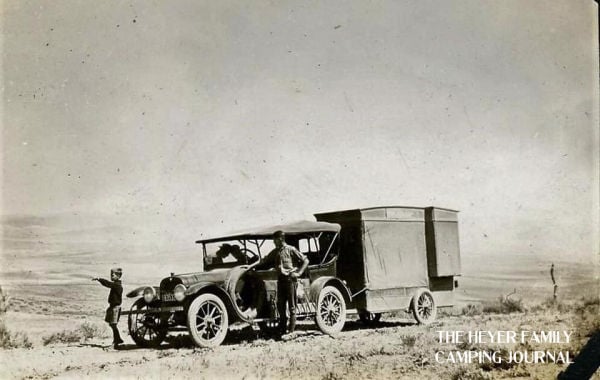 When his mother died, Charles Heyer discovered a box that contained the trip’s diary and several photo albums. The family had brought cameras along for the ride, as well as the gear they would need to develop photos en route, and his mother later typed up the hand-written diary.

Heyer has used more modern technology to self-publish and promote the diary, including Facebook groups devoted to antique cars, travel, and rustic camping. Sometimes the family did find an established campground filled with other adventurers — and sometimes they just pulled off the road and pitched camp, with little more than a lantern to guide them. In one of the more humorous episodes of the book, Arthur Heyer recounts that the family woke up one morning and discovered that they had set up camp on the front lawn of a church.

Having left Montclair on June 21, 1921 — an event dutifully covered by The New York Times — the Heyers wound their way through the upper Midwest and the Rockies, reaching San Francisco on September 12. Their return journey would take a more southerly route through Nevada, Utah, Kansas and Missouri before arriving back in Montclair on October 10.

“Our trip of four months was a lifetime of education, experience and adventure,” Arthur Heyer wrote. “How to take a transcontinental trip and enjoy it? Travel with an open and inquiring mind — a desire to learn and understand the life and activities in the many districts — all so different in topography, climate, agriculture, industry and ideals.”

“To see, to understand, to remember,” he added. “Then, every foot of the trip is worthwhile, provided some member of the party understands CAMP COOKING.”

Charles Heyer sells “The Heyer Family Camping Journal” through his Facebook page for $20, which includes postage. 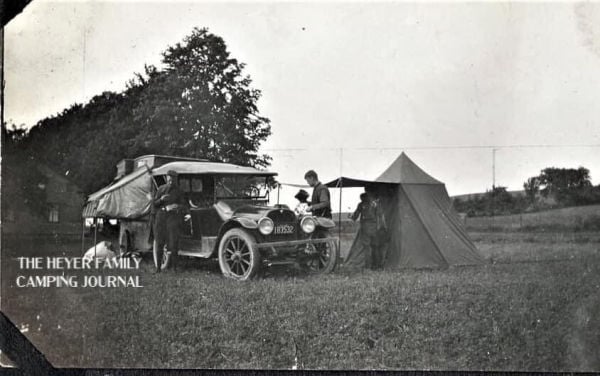