Dino The Barber Is Retiring 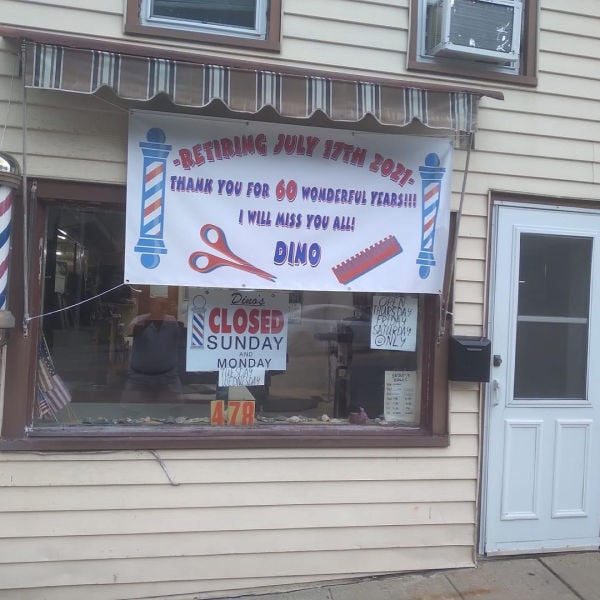 It’s the end of a hair era in Verona: Dino Ditizii, who has cut hair here for 60 years, is retiring on Saturday, July 17.

The Verona Barber Shop, just Dino’s if you’ve been in Verona a while, has never been about trends or fads. Ditizii practiced barber basics, learned in Italy and brought along when he emigrated  to New Jersey. He got a job at the Verona Barber Shop, which was then owned by Joe Tucci and charging $1 for adult haircuts and 75 cents for kids. In the early 1970s, Ditizii bought the business, developing a following among residents and fellow business owners. Mike Leuzzi recalled on Facebook today that both his grandfather and his father, who owned the Verona Sports Center until his retirement in January 2020, got their hair cut by Dino.

(The shop itself hasn’t changed much over the years either. According to Verona’s unofficial historian, Robert L. Williams, a man by the name of Zabina Williams built the building as a house for his family in 1863. It remained primarily a dwelling into the 1940s. When Tucci set up his barbershop in the structure, he lived upstairs.)

Many Verona boys got their childhood haircuts at Dino’s, and sometimes their sisters got a no-frills cut there too when it was easier for parents to bundle all the kids in at once. And for all those who moved on to trendier venues for their grooming, there was still a steady supply of children and men who wanted to keep things simple. “Sadly, I need to find a new place to get a haircut,” Glenn Houthuysen, chair of the Verona Historic Preservation Commission, wrote on Facebook today.

Verona has a new generation of barbershops and salons now and the owners of two of them paid tribute to Ditizii today. “May your retirement be relaxing,” wrote Anthony Lombardi, the owner of Anthony Robert Salon. “Thank you for setting a wonderful example for the rest of us.”