In a  game that had enough drama for an Oscar nomination, the Verona High School softball team won the NJSIAA Group 2 semifinal on Tuesday, beating one of the top-ranked teams in the state.

It took Verona 12 innings to secure the 9-8 win over Mahwah, thanks to solid defensive and offensive play. Verona got on the scoreboard first and held its lead until the fourth inning. By the fifth, Mahwah had pulled ahead by one run but Carlie Goldstein and Melanie Naeris, who would have a combined seven hits and four RBI on the afternoon, drove Verona back into contention.

The extra innings were nail-biters, complete with several leaping catches by Jessie Loudon. After a scoreless eighth and ninth, softball’s tie-breaker rule kicked in, which meant that each team started the inning with a runner already on second. Mahwah got that runner home in the 10th and 11th innings, but Verona answered back with its own scoring both times. Faith Reed’s base-running speed got her to first and Naeris home, spoiling Mahwah’s attempted double play.

In the top of the 12th, Mahwah scored again and, as Verona prepped for its at-bat, Naeris repeated the mantra that she had already said to the team several times that afternoon: “No pressure.” Soon enough, Verona would have three runners on base and the full attention of the large crowd. There was a stunned moment of silence when Naeris sent Megan Meehan home with a line drive up the middle–and then the team and the crowd erupted.

On Thursday, Verona will make its first trip to a G2 final since 2005, taking on South Jersey’s Robbinsville at 3 p.m. in Ivy Hill Park, which is adjacent to the Seton Hall University campus. 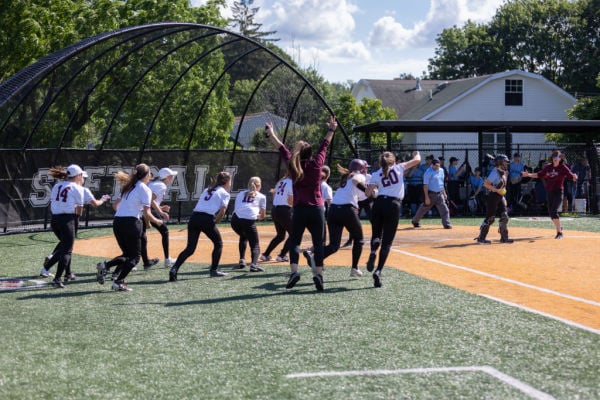