Alexis Duhaney won’t be stuck on the sidelines.

An alumna of the Verona High School class of 2017, Duhaney is now a graduate of New York University (NYU), with a major in sports management and a concentration in sports law. Although Duhaney didn’t anticipate studying sports management, her love for sports runs deep — enough so that one day, she hopes to be a general manager in the NFL.

Duhaney played tennis at both VHS and the University of Miami, but her true love is football. “I really started watching football in middle school,” she says. “We had a relative that played for the Atlanta Falcons, so we’d always watch his games.” While others would be content to remain a fan, Duhaney wanted to be on the inside of the sport’s operations. “In high school, the New York Jets had a day where students could come in and learn about the management and business side of the game, and it was so interesting to me. I knew then that I wanted a career in this, and to work in football in the future.”

Initially, Duhaney didn’t think she’d want to work for a team: She did a Capstone internship with MyVeronaNJ as a sports reporter, and began her college career at the University of Miami studying broadcast journalism. But, she says, “I realized that broadcast journalism wasn’t for me, and I didn’t want to always be chasing down the next big story.” So, she looked to transfer, and eventually matriculated into NYU’s sports management major: “I really wanted to be in New York, since there’s so many major sports teams there, and so many opportunities for networking.”

NYU raised Duhaney’s excitement about working in the sports business. “My teachers were so passionate about sports, and they’d always tell us stories about their favorite teams,” she says. However, merely studying sports management and reading books about the business wasn’t enough for Duhaney. She wanted to be a part of the team — and in the summer of 2020, secured an internship with the NFL itself.

The NFL offers paid summer internships for rising undergraduate seniors and graduate school students within a specific department of the league, and that’s how Duhaney worked in the NFL’s youth football division. “Unfortunately, it was all virtual this year because of the pandemic,” she says. “But, I still had a great experience, and I worked with three other interns to increase the league’s youth outreach capabilities.” The internship culminated in a presentation to league executives about Duhaney and her team’s project, a program in which middle school football players submitted videos of themselves executing game techniques, with a winner selected at the end of the week. “It was nerve-wracking to make a presentation to the executives, but the NFL actually ended up adopting some aspects of our project into the Nike 11-Online program,” an online portal for students to gain flag football skills.

Duhaney acknowledges that it’s not always easy working in professional sports, though, especially as a woman. “We can’t actually play professional football, and there’s so few women working as coaches, working as managers, working in operations.” But, Duhaney says, “The NFL has really been trying to increase outreach to women, and I felt so supported during my internship, both by other girls and men in the league.” Duhaney also acknowledges her own desire to serve as a role model for other girls hoping to work in professional sports: “I think more women should absolutely get involved in this, and I think my goals are just one piece of this.”

At the end of the day, though, Duhaney worked with the NFL because she loves the game, such that even after her internship ended, she sought out a position with a New York City college football team, and ended up working as an intern for Fordham her senior year. “I kind of did a little bit of everything,” she says. “I’d film games and practices, organize logistics, make sure everything was in order when the team would go away. I’m actually glad I got to work with a smaller Division 1 team, since at the bigger schools, interns might only do one thing. But, I got to fully work with the team, and it was great getting that experience.”

Duhaney’s favorite part of her Fordham internship was getting to know the players, and actively engaging with the organization. “The players have to memorize complex plays, they have to communicate with each other in a split second, they have to fully trust each other and work as a unit.” Football is a highly choreographed sport, and Duhaney acknowledges the precision and focus required of players to execute each play. But, she adds, “I really love getting to know everyone, and working both on the management and sports sides of things.”

Duhaney hopes to start working for the NFL as a scout, and has already secured interviews with multiple teams. “I want to be a GM eventually, and most GMs start off as scouts,” she says. “It’s a leadership role, and that’s my strong suit. I want to be able to choose who’s on my team, know what’s going on on the business and management side.” Duhaney admits that GM is a long-term goal, and it takes time and patience to rise through a team’s managerial ranks: “But, I know that’s what I want to do, because I want to stay in football — and I’m willing to work my way up from the bottom.”

UPDATE: Duhaney has been offered a full-time assistant scouting position with the Detroit Lions. Yes, she accepted it. 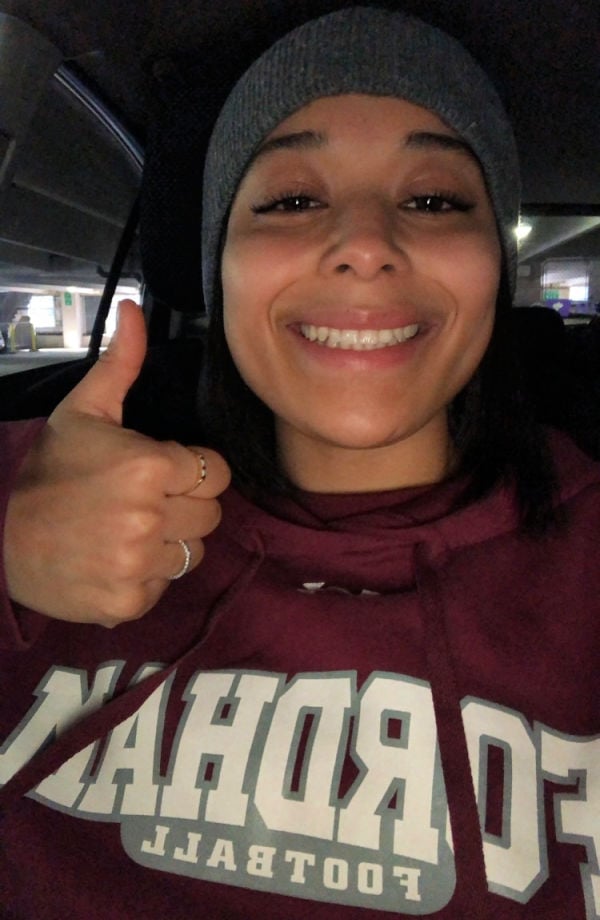