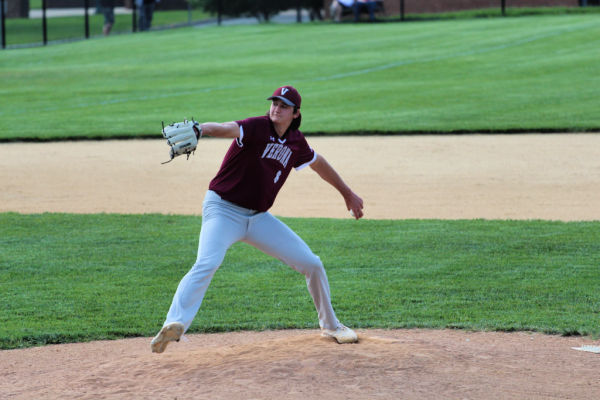 It’s an open secret by now that professional baseball scouts have been coming to Verona High School games this season to watch pitcher Pierce Coppola. A story on MLB.com, the website for Major League Baseball, takes that interest to a whole different level.

Today, MLB.com featured Coppola in a story entitled “These 5 Draft prospects are on the rise,” saying:

Left-handed pitchers with Coppola’s size (6-foot-8) don’t come around very often, so it’s not too shocking that the Florida recruit was getting a lot of attention in a surprisingly deep class of New Jersey high school arms. He’s all about projection, with a 90-93 mph fastball that can touch 95 and a low-80s sweeping breaking ball, both of which should improve as he adds strength to that large frame.

When Coppola was only a sophomore, he announced that he would play for the NCAA Division I baseball team of the University of Virginia. But then, last fall, Coppola decommitted from UVA and announced his commitment to the University of Florida instead. Now, the pro interest in Coppola may be calling even that commitment into question.

When MyVeronaNJ.com posted the MLB.com story to our Facebook page, a sharp-eyed reader noticed something else interesting about it. One of its authors is Jonathan Mayo, a former Verona resident who graduated Verona High School with the class of 1989. He started his journalism career as a sportswriter at the New York Post before becoming the first writer hired at MLB.com in 1999.

You can read Mayo’s story on Coppola on MLB.com here.