Over the centuries, the Passaic River went from being a majestic waterway to one that was polluted, abused and largely forgotten. Yet nature is resilient, so when a local group of five men decided on an adventure of canoeing and kayaking from Paterson to Newark on the Passaic River, they were in for a few surprises.

The first surprise was nature. The five–Geordie Smith, Dave Freschi, Olivier Blot, Stephane Mortier and Paul Mortier–found a green buffer clung to the sides of the river in all but the most industrialized areas. Just enough, it seemed, to support a good representation of wildlife. Turtles, deer and Great Blue Heron in Paterson. Hawks, swallows, crows, ducks, geese, heron and swans along the rest of the route. Fish jumped out of the water. 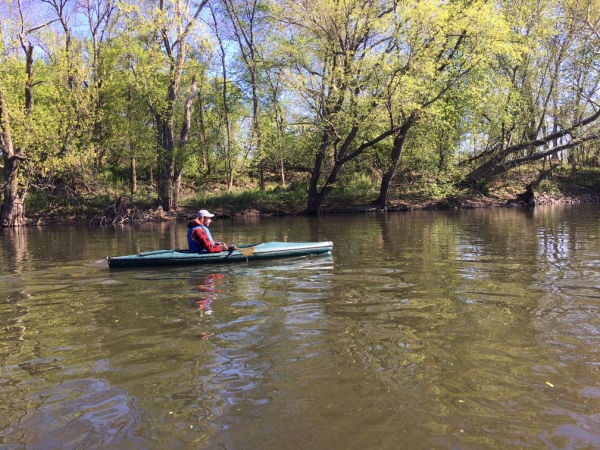 Organized by Smith, the men began their journey downstream from the massive Great Falls in Paterson, putting in the river near Bridge Street. The Great Falls is now a national park, and its adjacent museum (temporarily closed by the COVID-19 pandemic) has an extensive history of how the Passaic’s massive hydropower produced America’s first industrial revolution. But what was dumped into the Passaic by those factories and their successors would eventually turn the river into a heavily polluted Superfund site. In more recent years, the Passaic Valley Water Commission has created a “trail” called the Passaic River Blueway, complete with canoe and kayak access points and signage.

The second surprise was people’s interaction with the river–or lack thereof. For much of the route the river was just a border to some building, parking lot, or back yard often with some less than successful attempt to keep the river at bay. Yet the men also discovered a surprising number of nice parks and open spaces that embraced the river. 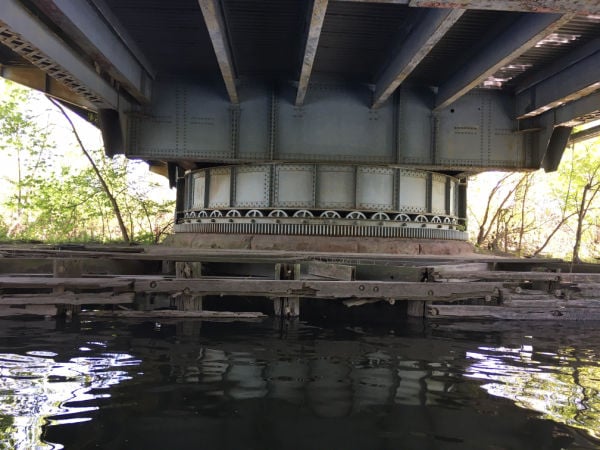 “We paddled past three crew houses, including one for Montclair High School,” says Freschi. “Aside from public spaces we saw residential yards that we envied, and riverfront with gardens, terraces, decks and boat launches. Who would have thought?” Freschi’s canoe, by the way, has a name: Fear & Curiosity. “According to Napoleon, these are the two levers that move men,” he says.

As the men approached Newark they found their third surprise, the glory of an industrial past. “Approaching Newark on the river we were presented with a unique perspective, one none of us have had before,” says Freschi. “With a panorama of the city and, even more impressive, going under the ancient engineering wonders of the many bridges we passed under. Seeing the construction and mechanisms to swing or lift these structures reminded us of something out of a Tim Burton movie.” 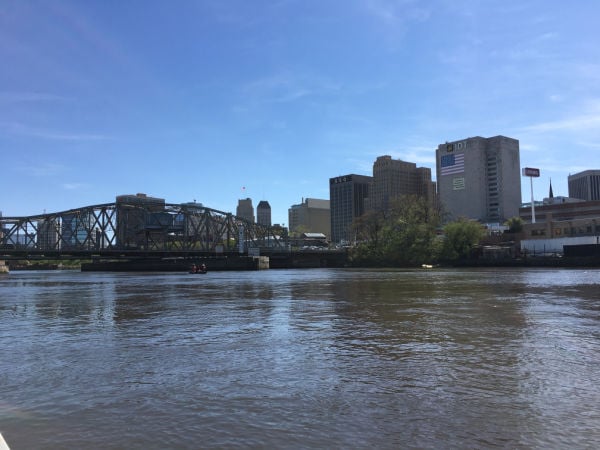 Newark had one more surprise in store: more green. The five ended their journey in one of the newest parks in our area, Newark Riverfront Park. They pulled up to a new dock and a freshly cleaned park with walking paths, beautiful landscaping and trees, all the more remarkable because the park, which stretches from the North Ward to the Ironbound, was built over heavily polluted land. “The park was full of people of all ages enjoying a beautiful spring day and giving us a curious look as we dragged our gear toward our cars,” Freschi says.

In all, the men completed the 20-mile journey in a little more than seven hours, with no mishaps and a lot of great fun. “Get out there and explore,” Freschi says.

The federal Environmental Protection Agency has a website on the pollution that occurred in the Passaic River, and what is being done to clean it up. You can learn more here.