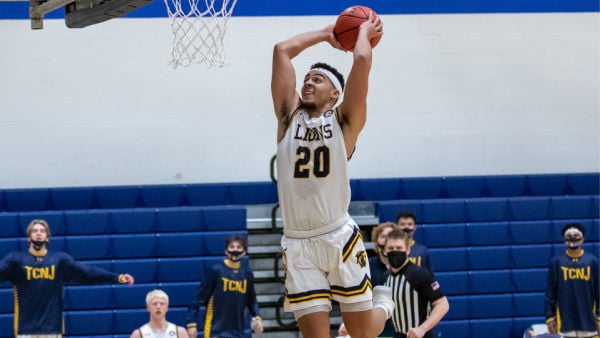 Travis Jocelyn, a senior member of the TCNJ men’s basketball team, was named D3hoops.com Third Team All-America, as announced by the organization on Thursday.

Jocelyn concluded his career with an excellent senior season. He averaged 20.9 points per game and 7.1 rebounds per game. He led the NJAC in scoring and also ranked third in the league in rebounding. The senior forward shot 46.3% from the field to rank second in the NJAC and 34% from three-point range, which was good for third in the conference.

“As a program, we are so proud of Travis for his All-American status,” TCNJ head coach Matt Goldsmith said. “He has put a stamp on TCNJ men’s basketball that will last a long time. Travis has earned every bucket and award he received this season by out-working people. He showed our young guys on a daily basis what it means to work as hard as an All-American, and this award makes it official! We are so proud of Travis and cannot wait to watch him succeed in whatever he decides to do in the future.”

Jocelyn adds another well-deserved award to his trophy case. This past month, he was named NJAC Pony Wilson Player of the Year as well as First Team All-NJAC. Jocelyn was additionally named D3hoops.com First Team All-Atlantic/Mid-Atlantic Region.

This season, Jocelyn exploded for a career-high 43 points in TCNJ’s Feb. 6 victory over Stockton. That was only nine points shy of the TCNJ single-game program record, set by Trenton State legend and former NBA player Greg Grant’s mark of 52 points.

Over the course of his career, Jocelyn scored 863 points for an average of 12 per game. He also tallied 334 rebounds and 110 three-pointers, and the 110 trifectas rank Jocelyn 12th all-time in TCNJ history.