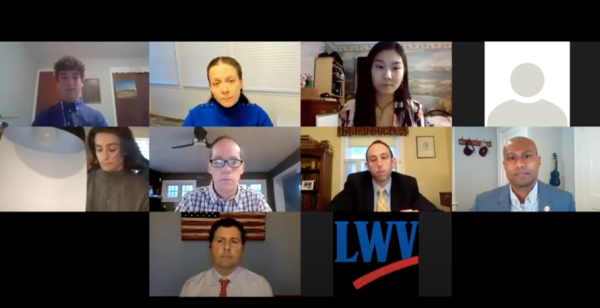 Audrey Ng, one of the co-founders of the newly created youth-led, nonpartisan advocacy group, said that more than 100 people registered had registered to listen to the forum, and almost all of them attended. “Attendees ranged from classmates, to VHS graduates, to Verona educators, to parents, and many interested members of the community,” Ng said. “The turnout was far better than we expected, and we are so grateful for everyone who came.” The event was sponsored by the League of Women Voters of the Montclair Area.

Some of the questions addressed to candidates during the 90-minute forum had been drawn from a VYV survey of young voters, which had shown that many did not know about the Town Council. Asked to rate their knowledge of the Council on a scale of 1 to 5, with 1 being “not at all familiar,” almost three-quarters of those surveyed (73.7)% said they the candidates said they were very or somewhat unfamiliar the body, which works with a paid town manager to govern Verona.

Several of the questions touched on issues that the candidates had addressed in their interviews with MyVeronaNJ.com, such as their plans to make Verona more sustainable and affordable housing. But the VYV forum also asked candidates for their thoughts on what Verona could do about mental health and gender discrimination. You can watch the full forum in the video below.

Ng said that VYV, which can be found on Instagram, will be launching a website soon, and that it will contain a transcript of the forum and other information.