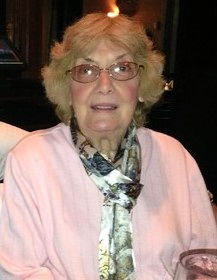 She was preceded in death by her spouse Alphonse Charles Tobia, November 1982 and son Alphonse Daniel, March 2020.

Born and raised in Newark, Gerry worked for the Howard Savings Bank-Newark and headed the executive cafeteria. Upon her success, she was transferred to the Glen Ridge location to oversee the Student Loans Department.

After 60 years as a Newark local, she relocated near Verona Park to be closer to her family. Gerry was active in the community and lived a vibrant life on and off the field. Her favorite pastime was enjoying sports, both participating and watching. You could spot her on the sidelines cheering on her children and grandchildren. As a proud, lifelong fan of the New York Yankees, she got a kick out of attending baseball games to eat hotdogs and popcorn with her family.

When it became too difficult to travel to the stadium, Gerry was home rooting for the home team with the ones she loved the most. She is fondly remembered around town driving up and down Bloomfield Avenue in her red Volvo. She was an avid collector of all things Derek Jeter, Frank Sinatra and MacGyver. Gerry was sharp-witted and compassionate. She spent her final days at home drinking espresso, eating pizza and watching reruns of John Wayne. Gerry will be united and laid to rest next to her husband.

“Gerry Red” we love you and miss you.