When Verona High School senior Cole Martin joined the winter track team as a freshman simply to stay in shape, he never dreamed he’d someday be a student-athlete in college. Martin committed to the University of Maine at Augusta (UMA), a Division II school, for the fall of 2021 to compete in pole vaulting for its track and field program.

Martin had little experience with track and field events as a freshman, but was introduced to pole vaulting early in his career. After just a few training sessions, he knew he enjoyed pole vaulting the most out of all the events. Since he enjoyed his first season on the VHS boys winter track team, he decided to try spring track that year, and wound up competing all four years.

“I joined the track team with no expectations and I think that’s what helped me find pole vaulting so engaging,” Martin says. “The months of practice between winter and spring helped me develop skills to become good at it and eager to compete.”

Martin pinpoints the peak of his career during his junior year. In between the winter and spring, Martin began training at a club gym, Apex Vaulting, in Fairfield to refine his pole vaulting skills. All that training set Martin up for success; as a junior during the winter 2020 track season, Martin was named as part of the All-Essex County Second Team. He placed second in the boys’ pole vault in the Essex County Championship that season too. The trend of success for Martin continued into the spring track season when he placed third in the boys’ pole vault at the NJSIAA Group Championships. 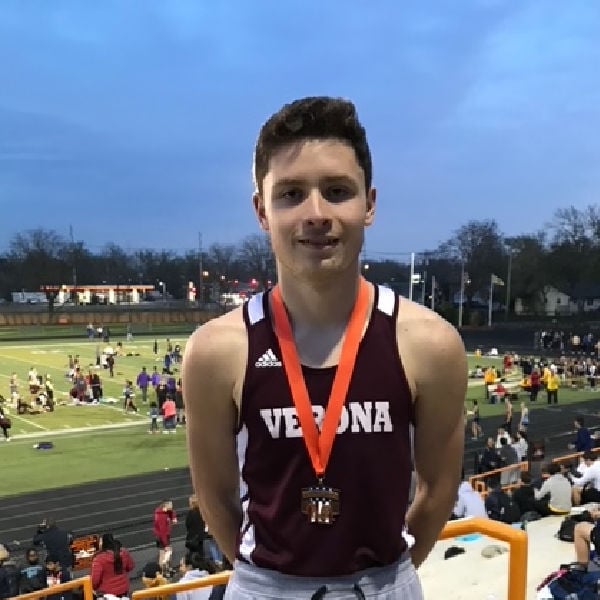 Martin and his family visited UMA’s campus while they were vacationing in Maine last summer. Right away, Martin knew this was the school for him, mainly due to the niche academic program he plans to pursue, aviation science and strong athletic program. Martin is currently working on getting a private pilot license and feels fortunate to find a school with this specialized field of study.

“Being a pilot is something I am ready to work hard for, just like my pole vaulting career,” Martin says. “Not many schools I visited offered aviation-related academic programs, so that made me really excited about the school. Mixed with welcoming athletic directors and a well-structured pole vaulting team, this school is a great fit for me.”

Martin will also have an advantage when it comes time to train in cold Maine winters. This year, the VHS boys’ winter track team held practices and events outdoors because of COVID instead of competing indoors. While pole vault isn’t possible in the cold, Martin ran with the team in warmups and routine practice outdoors. He continued to train in pole vault indoors but cleaned the poles outdoors after practice to keep them in good shape. Since Maine has very cold winters, Martin says more exposure to the wintry weather primed him for future cold training conditions for his upcoming college career.

However, Martin is not too concerned about the winters in Maine just yet because he will only be competing in the spring season for his freshman year with off-season conditioning. He is focused on making the most of his athletic career as a pole vaulter and adjusting to life as a student-athlete.

“I plan to manage my time between training, competing, and studying to succeed as a student and as an athlete,” Martin says. “Whenever I am competing, I always keep in mind that the situation can change so quickly, so I just focus on the opportunities to jump the highest I can.”