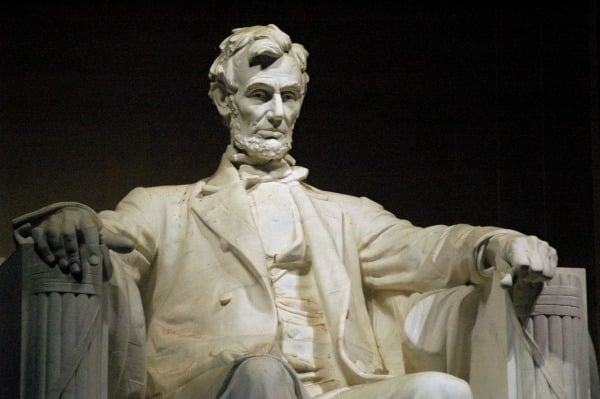 Today is Presidents Day; meant to honor all U.S. Presidents (and falling in between the dates of Lincoln’s and Washington’s birth). I want to write something positive. I want to BE positive on this day, but I’m just so angry. It’s an anger that’s been burning a hole in me.

A perfect quote for today would be: “In politics as in philosophy, my tenets are few and simple. The leading one of which, and indeed that which embraces most others, is to be honest and just ourselves and to exact it from others, meddling as little as possible in their affairs where our own are not involved. If this maxim was generally adopted, wars would cease and our swords would soon be converted into reap hooks and our harvests be more peaceful, abundant, and happy.” (George Washington). But instead I find myself focused on one from the Bible: He said to them, “The Scriptures declare, ‘My Temple will be called a house of prayer,’ but you have turned it into a den of thieves!” (Matthew 21:13)

In my mind, the buildings in our Capitol (not just our Capitol building), are in holy; they are sacred halls of history. They have been desecrated. I am not referring only to the rioters of January 6th, but to those who allowed the desecration. They are both in the wrong as they have taken and perverted what was so miraculously created over two hundred years ago and has struggled to grow and become a beacon to so many.

One of the greatest documents that form the foundation of our country begins: “We the People of the United States.” It is a statement of unity. The United States is not to be a country of us and them. It is founded on WE; all of us. WE are this country. Or at least that is what we should strive to be.

We have never been perfect; we never will be. Yet, most of our great leaders worked towards making us a country of UNITED states. While we strive for equality; even as it does not yet exist. We should be working towards freedom and justice for ALL. We cannot turn a blind eye to crimes that are committed; yet we do. We judge by appearance and affluence and not by evidence and honesty of character.

We need to do better. We need to hold our representatives (no matter what level of government we are talking about) to the standards on which the foundation of this country was formed. We need them to BE public servants; serving WE the people and not themselves or a select few. We need to hold them accountable for their actions. We need to hold ourselves accountable. When our representatives cease to work for the needs of those they represent we need to make our voices heard. We the people have a great power; we have the power to vote and choose who will represent us and when they no longer stand on an ethical foundation, we have the responsibility to cast our vote elsewhere. If we are to BE the United States of America, it is time that we acted as one and that we expect and perhaps demand that those in leadership positions do the same.

I am still angry, even as I realize that anger does nothing but hurt me. (I’m talking about the burning in my chest and that gnawing headache.) I can work to find ways to release that negative energy and channel in the positive. While I cannot ignore the evil that does exist, I can instead focus on changing these injustices in the positive and productive way. Perhaps my little ripples of kindness and compassion cannot overcome the tidal waves of selfishness and indifference to injustice, but that should not be a reason to stop trying. The more ripples I and others are able to make…who knows what the outcome might be?

So I conclude with yet another presidential quote. A quote from a man who was compassionate (a trait that we truly need in all leaders) and often loathed, Abraham Lincoln. “Let us then turn this government back into the channel in which the framers of the Constitution originally placed it.” They may have been said 163 years ago; maybe it’s time to listen.

So back in February (can I even remember that far back?) I questioned whether "it" was over. Maybe...
Government

Verona will hold its free rabies shot clinics for dogs and cats on Wednesday May 25. The rabies clinic...